Rochard (which I believe is pronounced “row-shard”, but I prefer to pronounce as “rock hard”) is a 2-D puzzle/platform game. The setting is a mining asteroid in the distant future where a mining company has set up shop. We play as Rochard, a technician who is tasked with keeping the station running, helping his co-workers and repelling the occasional invader.

The game’s main feature or gimmick is a special gun which can pick up distant objects and move them around as though the objects were weightless. The player (perhaps through a feature of the gun) can also greatly reduce the outpost’s artificial gravity, allowing Mr Rochard to bounce around more freely. Using the anti-gravity gun and the temporary low-gravity switch we navigate around the station, helping co-workers, fixing broken machines and throwing heavy objects at people who have boarded the station. 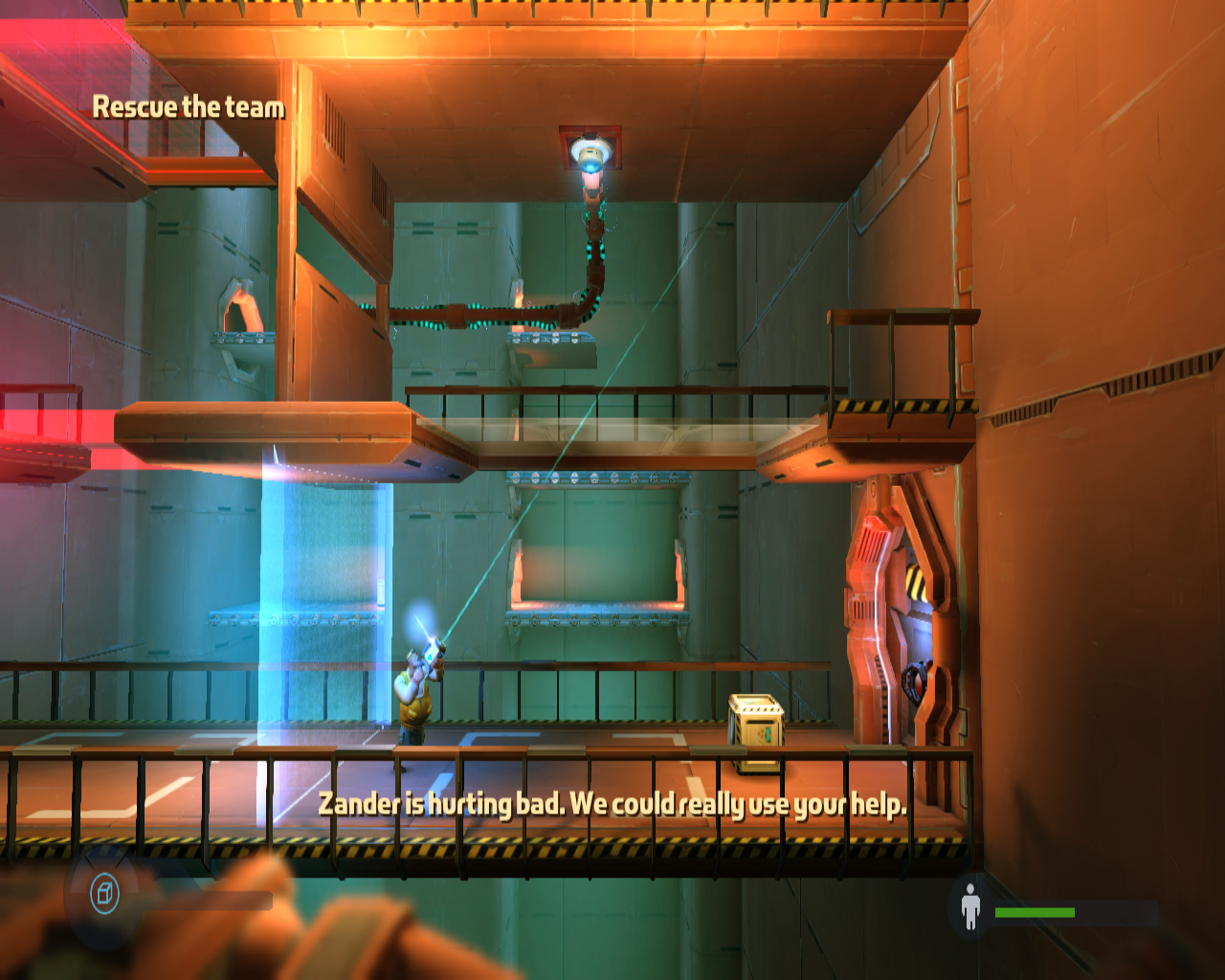 The tone of the game is playfully cynical and feels to me to be a 2-D cousin to Portal. Parts of the station are regularly breaking down, the company behind the mining operation appear to be quite mercenary in nature and a female co-worker regularly gives us updates or goals over the PA system. When these features are combined with some patches of dark humour and a speciality gun, I couldn’t help but feel Rochard is a low-budget relative to the Portal franchise.

The controls we use to manoeuvre Mr Rochard are pretty straight forward. We can run left or right. another key causes Rochard to jump and a fourth toggles low-gravity mode. The mouse buttons pick-up objects with the gun and repel/throw things.

The game has a pretty forgiving difficulty curve with its puzzles. New concepts, enemies and puzzle pieces are introduced slowly which I always appreciate. I feel like the game gives us more than enough time to get familiar with new features before throwing anything else at us.

I had just two complaints about the game. The first is that loading levels takes longer than I would expect (especially for a 2-D game). When we first start a level this is not a big deal, but if an enemy or barrier kills our character, we are not simply moved back to an earlier checkpoint, the whole level re-loads. This makes dying in the game a frustrating experience as death is followed by a long loading time along with a loss of progress.

The other thing that bothered me was I found the controls to be too crude for some of the puzzles. This means there are puzzles where the solution is obvious, but the lack of fine-tuned movement means we might try many times to get through the obstacle. To make matters worse, the anti-gravity gun shows us the path a thrown object should take and it’s not always accurate. This makes throwing objects at a target, especially through a slit or window, much more difficult than I would have liked.

In the end, I found I really enjoyed Rochard’s slightly dark humour, I liked the variety of goals (rescuing people, fighting off enemies, fixing failing station components) and I think the low-gravity gimmick is a good one. I would have liked if the controls/interface were a bit more forgiving, but otherwise Rochard is a good concept. Some stages take patience to get through, either due to enemies or the slower pace of the low-gravity environment. This is not a fast-paced platformer, it’s more of a puzzle game than an action game. Going into Rochard with this understanding will help set the tone and expectations.