Life Goes On: Done To Death

Life Goes On: Done To Death is a 2-D, puzzle/platorm game with a lot of familiar characteristics. Like just about all puzzle platformes, from Super Mario through to Trine, the objective is to travel through a series of maps, solving puzzles along the way. Each map has a starting point, a bunch of ledges, traps & puzzles, and an end goal. The controls are pretty simple with our character mostly just moving left or right and jumping. 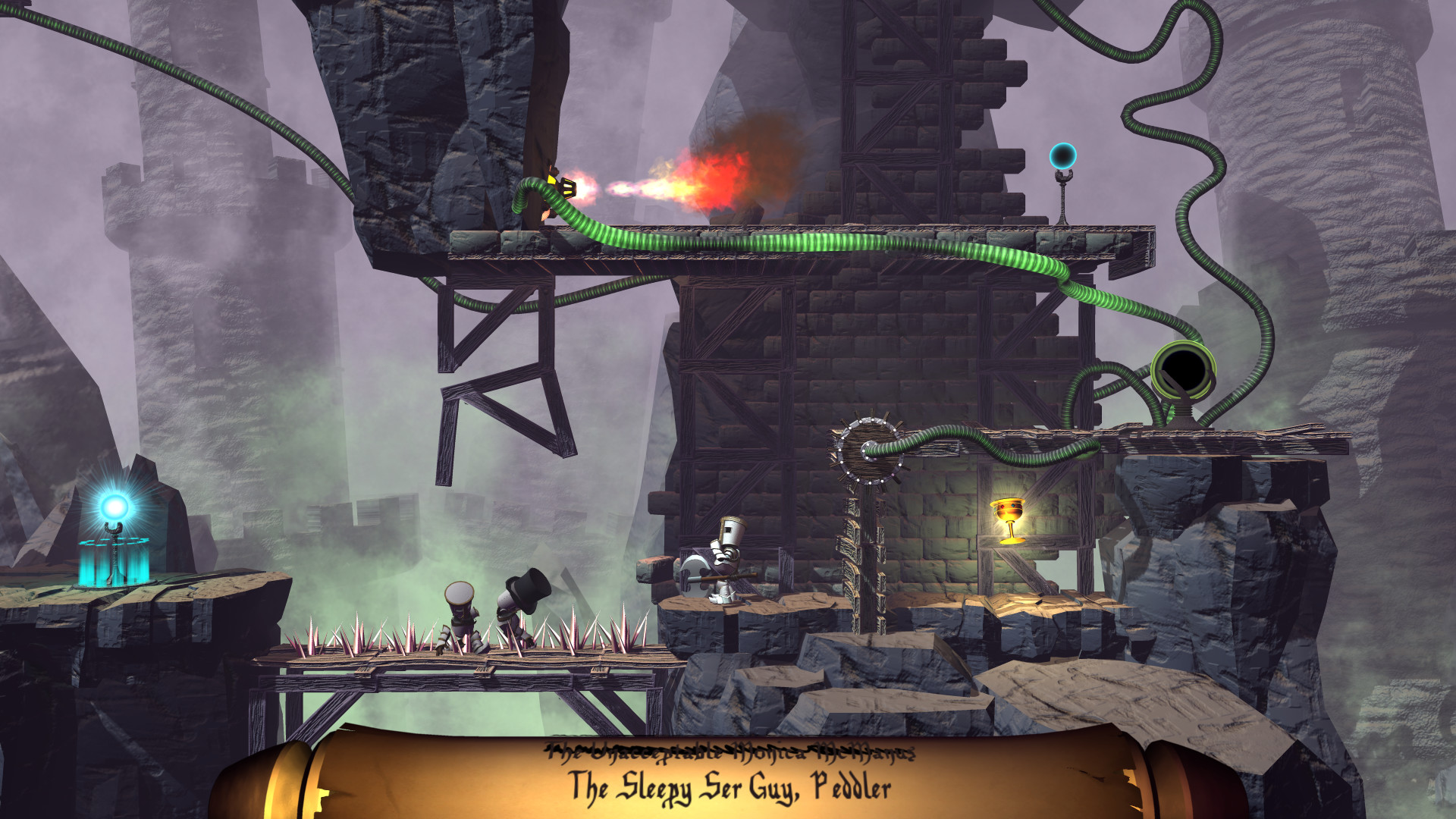 What sets Life Goes On apart from other puzzle/platform games is the way we advance through puzzles. While Mario and Super Tux are dashing heros attempting to get from Point A to Point B without dying, Life Goes On takes a different, darker approach: the hero dies. Most of the puzzles in Life Goes On require the hero character to die in some special way in order to advance. Once the player’s character dies, a new character is spawned and, if the first character died in the proper way, the second one can advance to the next stage of the map.

As an example, let’s imagine you have come to a large pit filled with spikes. Where Mario might run and jump across the pit and the Thief from Trine might swing across with a grappling hook, in Life Goes On our little knight simply jumps onto the spikes and dies. A new knight is immediately spawned and jumps into the pit, landing on his dead friend’s body. The body acts as a platform and our second knight can leap to the far side of the pit, advancing to the next puzzle. Chances are our second knight will die too, maybe by falling into an electrical circuit to activate a device, or by leaping into saw blades so his body will be flung onto a distant button that opens a door.

The point, strictly speaking, isn’t for the knight to die, but for each knight to die in a meaningful way which helps the cause. In a way the game walks an odd line between dark humour (the player intentionally killing her own characters in bizzare ways) and nobility (self-sacrifice for the greater good). Watching knights fry in giant bug zappers to advance the plot is both somewhat morbid and oddly moving, depending on the player’s mood.

I played Life Goes On all the way through and found there to be a varity of levels – there are multiple settings or worlds, each with their own themes. The puzzles, for the most part, start out quite easy, like the spike trap I mentioned above, and gradually get more complex. By the end, some puzzles have multiple buttons, traps and doors that need to be opened in the correct order before the knights can advance.

Apart from the rather unique spin on puzzle platforming where the player tries to die, there were a couple of things I really enjoyed about Life Goes On. I’ve mentioned there is a certain charming humour in the game and anyone who likes Monty Python style dark humour will problably enjoy this adventure. I liked that the controls were super simple (left, right, jump, drop) and the art style is simple while also being attractive. In other words there isn’t much visual clutter. I liked the variety in the levels and I appreciated this is a casual game we can pick up and play for ten minutes at a time.

Two things I especially liked were that Life Goes On features no time limit and no limit on the number of knights we can use in a given level. We get bonuses for killing as few knights as possible or for completing a map quickly, but we can take as many minutes (and knights) as needed to complete objectives.

There were just two things I did not like about Life Goes On and both were relatively minor issues. The first is that I think the developers had a screen with a higher resolution than I do. Some levels have objectives or targets which the player (if they are on a 1280×1024 screen) cannot see. There were a few times I found myself trying to launch my knights at something off screen, working blindly by trial and error. Having the ability to pan the screen would have been a huge help in those few times this happened.

My second issue was that the game is linear. Most of the time this is not an issue, but it means if the player gets stuck (which I did just twice in the whole game, mostly due to the previous issue) then we cannot simply skip a level and come back to it. Twice I turned to walk-through videos so I could find out what I was missing off screen or so I could find the precise angle necessary to launch my knight into the next area.

Those minor (mostly screen-size) issues aside, I really liked Life Goes On. The levels are mostly short, the concept is fun and the controls are super easy to pick up. This is a good casual game and one I’m definitely recommending to friends. I deinitely like the dark spin on the heroes being faceless knights, sacrificing themselves for a cause rather than famous heroes out to get the girl. It brings a surprisingly welcome fresh approach to the puzzle/platform genre.