Bastion is an action role playing game (RPG) where we play as a character called the Kid. At the start of the game the Kid wakes up to a world where virtually everything has been destroyed and bits of the world are hovering in the sky. Through a little exploration we discover the world has been sundered by an event called the Calamity and we need to find key pieces of the world (called cores and shards) to put things back together. Our mission is to locate these cores and bring them back to a central location called the Bastion.

On the surface, Bastion starts out looking like a typical 2-D action RPG from the 1990s that got a graphics upgrade. We wander around simple (mostly linear) maps while fighting monsters, collecting experience through dropped “fragments” and gradually upgrade our weapons. The game has a simple style to it which, until you play it, belies Bastion’s fantastic variety. But I’ll come back to variety later. 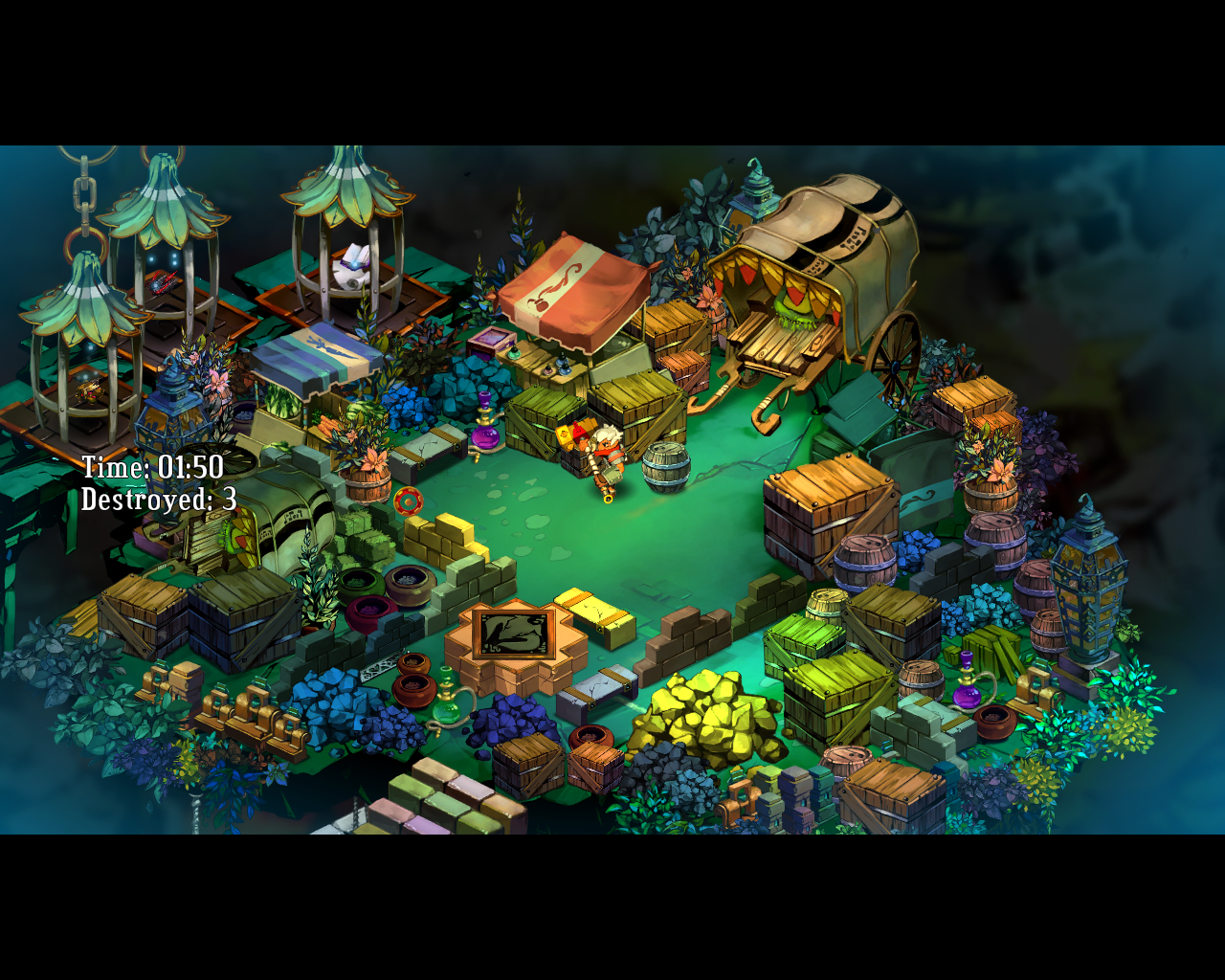 What makes Bastion stand out, the game’s core “gimmick”, is the narration. Typically action RPGs are divided in their game play and story. Usually an action RPG has us playing – fighting monsters and exploring – and then takes breaks to provide the story. The plot of these games is usually fed to us through reading or watching cut-scenes while taking breaks from the game play. Bastion merges game play and story almost seamlessly through narration.

As we wander about the sundered world, fighting and exploring, a thick, honey-like voice narrates what we do, what our character is seeing, where he is going and provides back story. We don’t click on anything to get an item’s description, when we get close to an object the narrator tells us about it. When we encounter new enemies, the narrator gives us some details on them without breaking the flow of the game. When we’re wandering through some empty area, the game provides back story via narration. The voice is deep, soothing, sometimes ominous, and always friendly. It also has a certain flair. For example, when doing down some stairs, the game doesn’t say, “The Kid goes downstairs.” instead the game might say, “The Kid reckons something called a “core” can be found down below.” The narration provides filler sometimes too. For example, early on I got my hands on some weapons and was learning the controls. My character was running around the screen, randomly attacking objects and the narrator’s voice came on and said, “The Kid just rages for a while.” It was an apt description.

Much of the game involves combat and, at first, the combat seems pretty simple. We are given a shield to block attacks, a melee weapon, one ranged weapon and a special attack. A button on the keyboard also gives us the ability to dodge if combat gets too intense. We start out carrying a hammer and a bow, gaining other weapons as the game advances. New weapons are usually better than old ones, giving incentive to swap out items as the game moves on. We can also apply minor upgrades to weapons when visiting the hub of the game, the Bastion. The range of weapons we can pick up (hammers, swords, guns, a flame thrower, a battering ram) gives the combat a good deal of variety and I like that. The controls and concepts in Bastion’s combat are simple, but the variety keeps things fresh.

I also greatly appreciate that in Bastion we can often skip combat, especially boss fights. Boss fights tend to take a long time and being able to dodge around the boss monster to get to the end of the level was an “out” I often took. Avoiding combat this way usually does not carry any penalty and helps to maintain the rapid flow of the action.

On the whole, I liked Bastion. It has simple controls, straight forward combat, attractive artwork and the narrator hook really works well for blending game play with story. I also like that, as we walk, the world snaps into place around the Kid. Floating blocks rise up or fall down into place, forging the path in front of us. At first I found this feature a little distracting as it meant there was always movement at the edge of the screen. However, as I got used to it I found this build-as-you-go approach to drawing the world beneficial. Bastion does not have a map screen, it doesn’t need one. If we see a piece of solid world in front of us it means we have been there before and we are needlessly backtracking. If we see empty space, that is an area we have not visited yet. Since we only visit most parts of the world once, the snap-together style of world discovery means we just need to keep walking into the empty spaces that have not formed yet – no map required.

I had just four complaints about Bastion, most of them minor. The first is that it is really easy to fall off the edge of the world. This is not fatal, but it is annoying, especially in the heat of combat. The Kid is always one dodge move or missed step away from falling off the world and getting warped back into another spot. I would have preferred an invisible barrier at the edges to avoid falling. The 2.5-D art style means sometimes it’s not clear what is a piece of background and what is a ledge and I fell a lot, especially in a section of the game where we hop from one floating platform to another.

My second gripe was combat can get confusing with the set camera angle. We cannot zoom in on the action or rotate the camera so any combat involving two or more foes tends to hide our character and his actions. This can make it hard to see which way our shield is facing or which creature nearby is a friend or foe.

A minor issue I ran into was there is no way to save the game wherever we want. The game only saves when entering the Bastion. If we are halfway through a level and need to go do something else, all our progress is lost. If we get back to the Bastion and do a bunch of maintenance and then quit, our progress is lost. The only safe time to exit the game is right after our character walks into the Bastion area. The game claims any time the save-gear symbol is displayed our progress has been saved, but I found this to not be accurate. For the most part this is okay, the levels are typically short. But make sure you have 10-20 minutes set aside to play in order to get back to the Bastion, we cannot simply save and exit whenever we feel like it.

My last gripe, and it is a minor one, is the game seems to tease us with the ending. About halfway through playing the game indicated I was almost done. Then, without giving away too much of the plot, something happens and we need to start our mission over with a new approach. Then, when it’s almost done, there is a side quest. Then a surprise mission. Then we get to the end and the final level is huge, it’s basically four or five levels packed into one. I kept thinking, “Okay, I beat the boss, time to go home and wrap this up. Okay, no this next guy is the final boss and…. Nope, that wasn’t him. Okay one more boss…” The game ends with a couple of choices of the moral variety and if we want to see all possible endings (I think there are four in total) we need to play through that final, long level again.

Despite these issues, I feel Bastion is a good game overall. It takes some simple controls and style, straight forward combat and small maps and weaves them into a game with a surprisingly large amount of variety. The narration is both appealing and smooth, making the plot a part of the game rather than something that happens between playing parts of the game. I especially like the ability to dodge or work around combat as it keeps the pace of the game moving quickly.

One final aspect of the game I liked is we do not need to explore everything or visit every area to complete the game. I pretty much played straight through without attempting to get all of the items, experience points and potion. There were lots of upgrades left to get and practise levels to explore. But the game is forgiving enough that we can pretty much walk straight through and still complete the final boss fight without serious difficulty.

I will admit I also really like the story of Bastion. I was a little confused at first about who the characters and clans were and how they fit together. But, in the end, the story all comes together and it makes for a moving tale. The last three levels especially introduce concepts and opponents which make the game well worthwhile. In the end, despite some minor frustrations, I appreciated the story told and was moved by it. I think that in itself makes Bastion worth playing – it is as much art as it is game.