A little while ago I mentioned looking for a fun, relatively simple multiple-player game. After trying a few, such as The Cave and Heroes of the Storm, I was still on a quest to find something new, preferably something fantasy related. After poking around some discussion threads and Steam for a while I discovered https://www.championsofregnum.com/ Champions of Regnum.

Champions of Regnum is a multi-player fantasy role playing game. CoR is cross-platform and runs on Linux, OS and Windows. The game is free to play, though there are optional in-game purchases which can be made. One of the core ideas of the game is that characters will eventually advance and, at higher levels, enter into a three-way war that is perpetually taking place between the game’s kingdoms. But the war stuff comes later, let’s go back to the beginning.

CoR begins by getting us to create a free account for ourselves and then choose to join one of the game’s three realms. The realm we select does not appear to affect our character at all, just the people we play with and scenery we will get to look at in the early levels. If you like mountains, you might want one realm, if you want Shire-like green fields, you pick another realm. 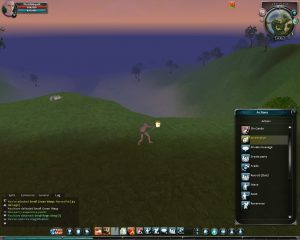 Then we set up a character. Characters can be male or female, which just changes their appearance. We can pick one of four races: human, elf, half-elf and something that looks like a cross between a toddler and a giant rabbit. Then we can select a class. Which race we pick can narrow down our class options, but from what I saw there are just three available classes: melee fighter, archer and mage. The fighter walks up close to enemies and slices at them with sharp objects, the archer stands back and fires arrows into foes and the mage uses magic to fell enemies. Each class gets to specialize a bit later in the game, after level ten.

Once we have created a character, we are introduced to the realm, walked through a few simple tutorials and then sent out to explore. The game is quite open and we can wander just about anywhere at any time, with a few minor level restrictions for some practice areas.

The controls are pretty straight forward. The AWSD keys walk our character around, Q and E rotate the camera (as does the mouse). Clicking on a friendly person initiates a conversation. Clicking on a hostile creature attacks it. Buttons along the bottom of the screen trigger actions (combat moves, spells, displaying character information and accessing our inventory).

Generally speaking the first few stages of the game are not only open, but I found my character was encouraged to explore pretty organically. I mean, I could just run around the whole kingdom, poking my nose in here and there. However, I found the questing system was a pretty good way to see the world.

As we walk about the land, especially villages, we encounter people who want to talk and give us side quests. Completing quests is generally the easiest way to gain experience and money. One villager wants us to collect items for her, another wants us to find someone who is missing, a third wants us to kill a goblin chief for him.

I have heard some people say CoR is grindy at the beginning and I’m not sure I agree. There are a lot of little quests, but they tend not to involve a lot of repetition. Almost every quest I went on took me to a new location and most required very few repeated tasks. My quests were usually “Find three of these” or “Kill five of those.” I didn’t run into many quests which covered familiar territory and none which involved hunting twenty of one thing over and over. We could hunt the same creatures virtually non-stop as the world is teaming with bears, orcs, wolves and snakes, but there is not much to gain by grinding kills and more can be gained by exploring and completing side quests.

As we progress in levels, we visit new places and get to move to bigger towns, then cities. Slowly we get closer to the battlegrounds where player vs player combat takes place. We get more challenging quests and get to see increasingly interesting landscapes and towns.

One of the more common complaints against CoR is the graphics. The game looks to me to be about on par with fantasy games from around the year 2000. Think in the same ballpark as the Neverwinter Nights classic. Personally, I usually did not mind the graphics level. It was typically good enough to get the point across and there wasn’t much visual clutter. I liked that. I did run into two glitches in the game involving graphics, one amusing and one not. 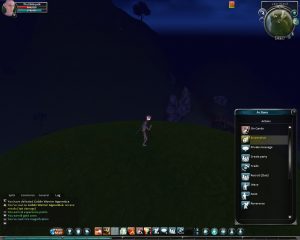 The amusing glitch is that some video drivers in some configurations will cause most of the character’s clothes to be invisible. I tried CoR on two machines and on the one with Intel graphics everything looks good. On the Radeon card though all humanoid characters were nude. This made for some rude and amusing interactions with other players who perhaps did not know they appeared to be nude. One thing I found especially odd was on the character selection screen, most of my character’s clothes were invisible, but my wizard’s staff and gloves were not. This made it look like I was wearing nothing but formal opera gloves and carrying a big stick.

A less funny glitch was that deep water also did not display properly. This meant my character could be walking along a beach and suddenly, without any warning, drown. I learned to keep an eye on the map when walking near rivers and sea shores in an effort to avoid instant character death.

To date I have not played CoR a lot. I’ve seen a few cities, explored some of the realm with another player and tried a few character classes. So far the experience has been positive. The game, despite its relatively low-level graphics, has some great nature views. The items and classes seem fairly well balanced. Travel and mounts are easy and quick. I like that there is a big, open beginner area where people can wander, learn, do quests and get a feel for the game before join the main conflict.

Mostly though I liked two aspects of CoR. The first is the game has simple controls. There is a gentle learning curve, there are tool tips for all the buttons on the screen and things generally work as expected. The game really eases the player into their role and avoids complicating things.

Secondly, I like how natural the game feels. There is not a lot of grinding, unless we want to grind. CoR basically gives us this world with lots of things to see, people to talk to and quests to do and lets us progress at our own pace. The quests will gently nudge us forward to the next person, the next town, the next progress point, but it’s a light push and one we can ignore if we want to explore or practice casting spells or try our luck against a camp of goblins. A bunch of players can stand around gossiping or go hunting together or complete a quest as a group, the game is fine with any and all of the above.

I haven’t done much interaction on the field of battle, so I can’t comment much on the class/realm balance yet. So far I don’t have any complaints other than I’m low level and tend to need to run away from some fights. I like that the game tries to maintain realm balance by rewarding players with more experience if they join a smaller or less powerful realm. I suspect, in the long term, this will help keep things on an even level.

All in all, I like CoR. It has a nice, open feel. It’s fairly easy to pick up and just start playing and the questing system lightly guides the player. Generally, there is not much grinding and (as a bonus) the game is free to play.