It has been several months since I last posted a game review and there are (somewhat) good reasons for that. Back in January, following my Papers Please review, I decided to play the game through again a few times to see the various ways the story would change. As it turns out, the Papers Please story changes quite a bit and, if you haven’t tried it yet, I highly recommend downloading the game as the plot gets to nail biting levels of intensity. At any rate, all the side-to-side mouse gestures eventually gave me carpal tunnel. I’ve been writing, coding and gaming for nearly three decades without a bodily glitch and Papers Please managed to do me in. Congratulations, Papers Please, you win.

Anyway, I had to take off a few months and then got side-tracked into the nasty world of Windows gaming (via WINE) playing Heroes of the Storm. As far as multi-player combat arena games go, Heroes of the Storm is quite enticing. It’s faster paced than other games I’ve tried in the same genre, the interface is quite nice too. I like there are a wide variety of heroes to try and lots of different gaming styles. The controls are nicely arranged and fairly simple. 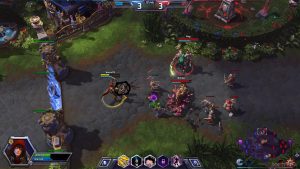 I had just two issues with Heroes. The first was that it’s exclusively to Windows and OS X (or is it macOS?). Updates sometimes break WINE compatibility, which is what I get for gaming on an unsupported platform. But what really struck me as odd while playing HotS was that the game takes long breaks between games and rewards players for not playing. Load times are horrible, the game frequently locks the player out to perform updates and updates often stall, requiring hours of wait time. I don’t think I have ever encountered a game which did not want to be played so badly. Plus, the player has daily quest slots and there are rewards for completing quests. This might seem like good motivation at first, but the player gets more rewards for less play time if they wait a few days, amassing quests, and then plays the bare minimum games to complete the set goals. In short, HotS rarely wants you to play, takes ages to load levels and rewards you for taking multi-day breaks. It’s a strange approach to game design.

Once HotS broke and failed to run under WINE any longer, my partner and I went looking for a new multi-player game to try together and we finally decided to give The Cave a try. We’re both into psychological oriented games and the puzzles sounded interesting without using pants-on-head twisted logic like many other adventure games. The Cave is about a group of seven people who venture into this underground series of levels. We learn a bit about each character’s past and their deep secrets or fears. The tone of the game is kept fairly light and there are bits of witty humour.

The player (or players in our case) control three characters at a time as they go spelunking. Each character had some special ability that sets them apart. One manipulates time, one might have an impenetrable shield. Each character can hold one item at a time to use on various puzzles or doors.

There are some things I enjoyed about The Cave. I like the variety of characters, I like the light-hearted tone of the game. I like the humour. The puzzles tend to be fairly straight forward for a quest game, making us stop and think for a moment, but not to the point where we wanted to throw things at the screen (or look up a walk-through). However, the game was not a keeper and was deleted after our first session due to the horrendous interface and controls. 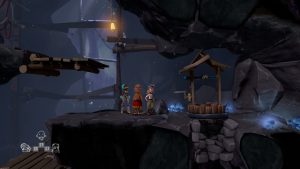 The game is multi-player, but only runs on one station (PC or console). The game does not appear to allow players to share a keyboard, so at least one controller needs to be involved. There are three characters in the cave, but only two can be controlled at once. This meant someone had to occasionally take control of the third character and catch it up to the rest of the group. This gets tedious quickly and the situation is made worse by the fact there is no split screen. All two or three players share one view and walking off of the screen causes the wandering player to freeze.

To make things even more confusing, any player can take over any character at any time. This means I can be running along with the knight and the player next to me (controlling the monk) can tap a button and cause us to switch bodies. It’s pretty disorienting and, when one player gets too far ahead, the other one freezes as they drop off the side of the screen.

We also found out the game would hit a dead end if we dropped an item we needed next to a trap. Pressing the button to pick up an item would cause the character touch the trap behind the item instead, killing the character and restarting the area.

The Cave might be okay for a single person playing using a keyboard, but it’s not at all suitable for multiple players. Definitely not on a PC and not on a console either. The lack of split screen and the way players switch bodies between characters and the way characters freeze when not on screen completely kill the pace of the game and felt far too awkward.

The Cave, by the way, is made by the same developer who made Psychonauts, another game which dived into the minds of characters. It too had good humour and imagination, but brain-damage-is-the-only-explanation controls. If you liked Psychonauts and were willing to overlook strange controls, then definitely give The Cave a try. But if you want smoother game play, or harder puzzles, it might be best to skip the spelunking expedition.