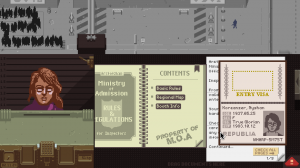 Papers Please takes place in a fictional world the parallels ours in the year 1982. The environment is roughly modeled after the Soviet Union and our character is a newly appointed border checkpoint guard. Our character sits in a booth all day, processing the passports and entry permits of people who want to gain access to the country. At the end of the day, we are paid based on the number of passports we correctly processed. The game then briefly shows us at home where we need to decide how much of our paycheque goes into rent, food, heat, savings and upgrades to our work equipment.

While at work, our character is paid based on the number of people we correctly admit or turn away at the border. Incorrectly processing a person’s application to enter the country can result in fines (or just not being paid). When we factor in the limited amount of time in the day, it is clear to see we need to work both quickly and accurately in order to make enough money so we can afford to eat and keep a roof over our family’s heads.

At this point, it might be hard to understand how Papers Please so completely won me over, so allow me to explain a few elements of the game which really ramped up the tension for me.

First, the character is not just working for himself, he also needs to provide for his family. The border guard position does not pay well, so each day it is a struggle to make enough for the family to eat and stay warm. This means we are often in a financially risky situation and the game knows that.

Which brings me to my second point. Throughout the game, the player needs to make moral choices. Do we allow a woman into the country because she claims she will be killed if we send her home, or do we turn her away so we get paid for correctly processing her application? The right thing seems to be letting her into the country, but if we don’t get paid enough at the end of the day we cannot afford the medicine for our sick children. Other guards at the border get paid based on the amount of work they do too and are willing to share in their wealth if you send them some prisoners to interrogate. So do you send someone into the prison where people rarely come back out and accept some bribes, or do you simply turn people away and risk not being able to make rent? These are not just moral choices, but also financial ones.

Third, the game has an interesting plot and we only get to see pieces of it. There are people (press members and political rebels) who want our help to get into the country and oppose the government. Do we turn them away, enforcing our oppressive government’s rule? Do we help the rebels while risking our life and the lives of our family? Do we pass messages for dissidents and perform their tasks, hoping they are the good guys? Or are the rebels terrorists and our government is right to restrict their movements? Who is right in this situation and which side should we trust?

As the game moves forward, the applicant checking process gets more involved. There are more rules and more papers to process, more rebels and reporters try to get into the country, there are more government crack-downs. The game builds to an intense climax where we need to decide which side we are on and whether we want to obey the rule of the land or turn traitor.

One aspect of the game I quite liked is that it gives us a long string of moral choices to make, but does not try to tell us which choice is the right one. We do not gain “angel” and “devil” points as with some other games. There is no “morality” bar at the top of the screen. Instead, our actions have realistic consequences. Helping a family reunite despite them not having the proper paperwork may get us fined. Sending someone to the detention centre may effectively end their life, but it results in bribe money we can use to feed our children. Quite often, the choices we make come down to helping a stranger or helping ourselves. Do we turn away a stranger and steal their passport to help our family or let the stranger pass through to no benefit to ourselves? The game is very hands-off in this regard, it doesn’t tell us what to do or scold or cheer us. We are simply given the choice and our character must deal with the consequences.

The first time I played through the game, I decided to play entirely by the book. I did exactly what the government’s rules told me to do. Rebels were ignored or turned away, rowdy entrants without proper documentation were sent to be interrogated, dangerous killers (if their documentation held up) were allowed in, and sobbing wives without entry papers were turned away. I collected bonus pay for shooting rebels who tried to jump the fence and detained people who tried to smuggle medicine into the country. I turned away reporters who wanted to shed light on my government’s shady practices.

All of the above might make my character sound like an unethical person and I would agree. But there was a flip side. Because of my clean record, my pay was rarely reduced and my family had food and shelter. Due to the extra money I received from guards working in the detention centre, I was able to adopt my orphaned niece. When I shot rebels jumping the border fence, it saved the life of my friend who worked with me at the border. In short, strangers suffered while my family and friends were taken care of. Had I gone a more risky and rebellious route, would my friends and family have survived?

Questions like that are what got me hooked on Papers Please. The game pulled me in and got me asking myself questions. Is it better to help one’s family at the expense of strangers? Or should I be thinking of the greater good and let my family suffer? Can I effect real change in the country before the authorities crack down on me or am I being foolish if I think I can make a difference? The game offers us a surprisingly open path with several ways we can go, several ways we can align ourselves. There are many risks to take and no guide other than our own conscience. This is a game I played through once and immediately started again because I wanted to see what would happen if I took an alternative path. I highly recommend Papers Please.