When they are small, I think most children imagine monsters lurking under their beds or in their closets. I certainly wasn’t any exception, though my imagination tended to expand the concept in an unusual direction. My young mind quickly graduated from simple fang-filled monsters and built up a more elaborate world. One in which my bed was in an information centre or a command post of sorts. Imaginary people came and went with messages. Barely seen foes gathered each night to watch and to try to intercept messages or to snipe the unwary with laser guns.

At night I would hide under blankets and pile up blankets or pillows between myself and the fictional enemy. A toe wiggle might distract the fiends while I peeked out the other end of the blanket. In my mind, my comrades and I built tiny periscopes so as to plot enemy positions and gather intelligence while remaining unseen. 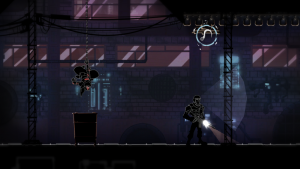 The above information probably explains a good number of things which showed up later in my life. For instance, it’s nearly impossible to find a therapist’s office that will return my calls. I think it also makes sense that my favourite non-Federation Star Trek aliens are the Romulans with their cloaked ships. However, the more on topic point is that I became a big fan of stealth games. Some of my favourites include SSN-21 Seawolf (a 1990s submarine game), Hostile Takeover (a third-person 3-D urban stealth game) and, more recently, Mark of the Ninja.

In Mark of the Ninja we take control of an inexperienced ninja warrior whose clan has just been attacked. We, along with a companion who appears occasionally to offer suggestions, must rescue our clan leader, seek revenge on those who wronged the clan and then… well, I don’t want to spoil the rest of the story.

The game is 2-D and we navigate our character through buildings, across roof tops and through air ducts in order to find valuable items, dodge guards, sneak up on targets and escape detection. The maps are generally open and usually provide us with several paths to get from the start of the level to our objective.

Along with providing us with different routes to follow, Mark of the Ninja is pretty flexible with its level of violence. This is something I quite like about the game because, as the main character is an armed ninja bent on revenge, one might assume the game is full of violence. And it can be, but it does not need to be. Each map includes many guards, each armed with a gun, who will raise an alarm and shoot our character on sight. There are three general ways to deal with these guards: 1. Avoid them completely by sneaking through ducts and climbing walls. 2. Distract them with noises or thrown items and, while they’re not looking, sneak by them. 3. Try to kill them.

Depending the scenario and one’s personality, we might employ all three methods. However, given that guards sometimes travel in groups, a full on frontal assault will almost always end with a dead hero and re-starting from the last check-point. Actually, one thing I like about Mark of the Ninja is that the game will offer bonus points for completing levels without an alarm being raised or for completing a level without killing anyone. Cunning and patience are, in this game, at least as important as employing violence.

One aspect of the game I liked a lot was that it is pretty clear how far noises we make carry and how far enemies can see. A guard’s line of sight is visualized with a cone of light and the noise we make (or that a guard’s footsteps make) are drawn on the screen as little circles. This means we can track guards by hearing where they walk and it’s pretty clear whether we are within their field of vision. This takes a lot of the guess work out of finding out how close we can get to a guard or how loud we are when we break a light bulb or run.

One of my few complaints about Mark of the Ninja was with regards to the controls. On the whole they are effective, there are relatively few controls and they’re customizable. But one thing that irked me was that, by default, there are multiple actions tied to one button. For example, the button to jump is also the button to attach to (or detach from) a wall. The button to pick up and hide a fallen guard is the same button the player uses to hide behind a nearby object. Often times I’d end up popping out of a grate in the floor when I wanted to be dropping down, or I’d pick up a body when I wanted to be hiding in the shadows.

The player’s character sticks firmly to walls or perches and this is very helpful. We don’t need to worry about accidentally falling out of a tree or off the side of a building because we need to tell the character to detach. This is very helpful. However, toward the end of the game there are a few places where we need to quickly perform one action, run to another location and perform another action. When the character sticks to walls or perches, quick movement becomes difficult and I ended up redoing a number of puzzles while I tried to work out the best way to move across a room without sticking to anything.

Despite a few small issues with the controls, I have a great time with Mark of the Ninja and, having completed the game through once, mostly by employing a lot of violence, I immediately wanted to play through again playing the role of a pacifist to see if I was up to the challenge. A game that ends and leaves me wanting more is definitely worthy of my recommendation.

On a final note, I mentioned earlier the game does have a story and the final chapter of that story presents an interesting puzzle for the player. I don’t want to give away the ending, but seeing the game through to the end and seeing the conclusion of the story is worthwhile.