“Crashed Lander is a gravity-based arcade game inspired by classics like Lunar Lander and Space Taxi. You’ve built a janky craft out of propane tanks and spare parts. Pilot it from pad to pad trying to beat your best time – then flirt with that fine line between speed and control.

If you’re brave enough to try Hard Mode you’ll be flopping around like a QWOPy, low gravity turtle. With a little practice you’ll be zippin’ around doin’ barrel rolls. You’ll see sites from the cutting edge of fractal mathematics – bizarre, organic shapes, arcane archaeological digs, and all manner of WTFderful alien vistas. Each level is a detailed hand-crafted landscape that encourages the player to explore – and goof around! You can also pilot your lander in virtual reality with your Oculus Rift.“ 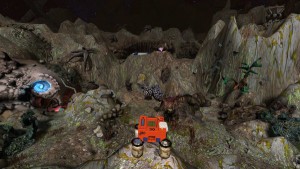 Basically, each level of the game opens us with us piloting a shaky lander around a map, looking for landing pads. Each level contains four landing pads and we are supposed to visit each pad (or checkpoint) and then move on to the next. Once we have landed on all four pads we have completed the level. We are also told how long the mission took us and this provides the game with a competitive component where we can race to beat our previous times or compare times with those of other players.

The game’s controls are fairly straight forward. We have six keys to turn, bank and adjust the course of the lander. Plus we can click our mouse button to apply the main thrusters. The right mouse button turns the game’s camera in case we want to have a look at the world around us. One thing I quite liked about Crashed Lander is there is a small compass built onto the lander. The compass always points toward the next landing pad, making the pads much easier to find. The compass is especially useful in situations where the landing pad is hidden under something as flying over the spot will make the compass spin around 180 degrees.

Of course, one of my favourite features in Crashed Lander is the tutorial. The game has one introductory level where the controls are explained and we are given a sandbox environment in which to play around, find landing pads and practice our touchdowns.

For the most part I found Crashed Lander to be forgiving, at least in the default mode. I made a handful of rough landings (almost a certainty the first time we touch down on a moving platform), but my lander was rarely damaged. Oh, I knocked a few rockets off my lander here and there, but I usually had to smash into a surface pretty hard to damage the craft significantly.

I definitely like this game. Crashed Lander has a range of neat vistas and simple controls. It has a flight simulator component, an easy tutorial and some inventive landing scenarios. I definitely recommend giving the game a try. There is a short demo for people who want to test fly Crashed Lander and I suspect most will want to get their hands on the rest of the levels once they have a taste.