Today I want to look back on a lighthearted game that I think deserves a nod. Abe’s Amazing Adventure is a retro adventure game styled after classic adventure/exploration games of the 1980s. As the project’s website states, Abe’s Amazing Adventure is “a scrolling, platform-jumping, key-collecting, ancient pyramid exploring game, vaguely in the style of similar games for the Commodore+4. The game is intended to show young people all the cool games they missed.”

It may be fitting that the last release of Abe was from 2005, ten years ago, making Abe a retro game styled after still further retro games. 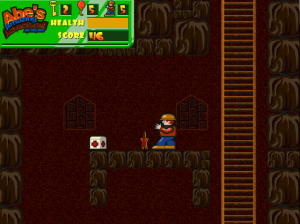 In Abe’s Amazing Adventure we play as Abe, exploring a long series of underground passages. We run around collecting keys that unlock doors and balloons (I’m not sure why we collect balloons), all the while dodging traps and monsters. Traps and monsters reduce our health, which can be replenished by picking up healing kits scattered around the map.

Unlike many older adventure games, Abe’s Amazing Adventure seems to all take place in one large map that just keeps going and going. There aren’t any breaks or loading screens, the map just continues to expand. One the one hand it is nice to have an open, free-flowing world. On the other hand, I think having the occasional break would give the player a sense of progress.

The graphics in Abe are quite simple. Each monster or trap, even Abe himself, is displayed using a few simple sprites. The game captures the artistic style of 1980s games while presenting a higher resolution display, suitable for modern screen. Personally, I found the simple, jerky animation style made me a touch motion sick after a while, but then again I have the same reaction to most modern first person games, so maybe my body is just touchy.

I admire Abe’s Amazing Adventure in that it accomplishes what it sets out to do. The very simple controls, simple animations and exploration feel a lot like classic 1980s games. With one exception: Abe doesn’t die much. Most puzzles are quite easy and the monsters tend to ignore Abe and move very slowly. This means there is less adventure in the sense of struggling for survival and more adventure in the sense of walking (lost) from room to room. This is probably fine since the game is targeting a younger audience, but I did feel Abe was much more forgiving than its 1980 counterparts.

I suspect most adults will find Abe slow paced and lacking in motivation. There isn’t much danger and we tend not to get rewards for progress. Young children will probably enjoy Abe more as these same qualities mean they can wander around, explore and not deal with the frustration of starting over again and again.