I usually do not take an interest in games which are described as artistic or as being interactive stories. I think games can be artistic (and many are), but I tend to shy away from titles where the focus appears to be on art rather than game play. This week I decided to make an exception (two exceptions, actually) to my rule and downloaded The Plan and You Have To Win The Game.

The concept behind The Plan is quite simple. When the game opens we are a fly. Using the AWSD keys we can cause the fly to, well, fly in the direction of our choosing. There aren’t any aerobatic tricks or complex vectors or momentum to worry about. We tap a key indicating the direction we want to move and the fly goes in that direction. We begin with our fly on the ground and we are supposed to travel upward. (The way is blocked if we move to either side.)

I played The Plan twice. The first time I explored a little, found there was very little room to move around in and learned to dodge out of the way of falling leaves. A falling leaf won’t kill us, it just blocks our upward movement for a while if it falls on us. I got caught in a spider web too, briefly. At first I thought I’d have to start the game over, but I just wiggled free of the web and continued on my way. About four minutes into the experience, the game crashed. I tried a second time, again taking off from the ground. I went straight up, dodging the occasional leaf and flying around the spider web. A few minutes in, the game crashed again.

Reading the reviews of this game make it sound like a beautiful artistic piece that moves people to tears. Maybe I’m missing out on a lot because I did not get to see the ending, but I didn’t get a strong emotional reaction from playing The Plan. I think the artwork is nice and the soft music sets a mild tone. For a second I felt suspense when I got stuck in the spider web, but that quickly passed when I realized I could just wiggle free. The one thing the game does that I think is interesting, from an emotional perspective, is the fly gets slowly smaller the higher we go. At the start of the game the fly looked to be about the size of my thumb on the screen. When the game crashed the fly was smaller, maybe the size of my little finger nail. The slow transition from big to small gives the illusion of a large world and a fragile character.

The Plan is pretty, in a dark way. It’s very simple and comes across as much as an interactive painting as a game, in my opinion. I personally found The Plan to be a neat thing to look at, and I admire the atmosphere created by the developers, but it didn’t spark any strong emotions in me.

The second artistic piece I tried this week is You Have To Win The Game. Now, technically, I don’t think YHTWTG promotes itself as art. The game flies the indie/retro flag, but I found the game came across as an art project more than a game.

YHTWTG is set up like a 1980s platform game with pit traps, spikes and platforms. We explore the vast, 8-bit colour style maps looking for…. something. I suspect we are after treasure or a princess, I didn’t make it all the way through. At any rate, the game is set up to look like a classic 1980s game. There are very limited colours, the game outputs very simple, repetitive beeps to go along with the on-screen action and our character dies a lot, mostly from falling into traps. What makes the game especially artistic is the way the display is warped to appear as though we are looking at a CRT display rather than a modern flat screen display. 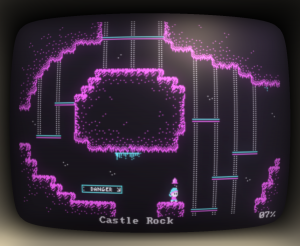 While I think it is interesting the makers of YHTWTG decided to create a game in this very retro style, I found YHTWTG probably did not invoke the intended reaction. Looking at this game (or art, if you prefer) reminded me of all the things that I did not enjoy about 1980s era game play. This title has (intentionally) poor graphics, intentionally emits annoying, repetitive high-pitched beeps and pads game play by making us take leaps of faith (to our doom, mostly). Some might look at YHTWTG and be reminded of the fun they had in decades past, but I found myself looking at this game and appreciating the progress we have since made.

Back in the 1980s games had very limited colour choices (if colour was available at all) and the best we might hope for sound-wise was a crappy internal speaker and games had to be simple & short because of limited disk space, so developers had to find ways of padding them. Today we have nicer video cards, better audio options, massive amounts of memory and large amounts of disk space, allowing us to let go of the limitations of the past. I’m not saying all modern games should use the available hardware to its maximum potential, but I do think games should not artificially limit themselves, which seems to be what YHTWTG is doing in order to capture the retro element.

What I’m saying is YHTWTG did not make me miss the computer games of my youth, but it did give me increased appreciation for more modern titles and I thank the developers for that. I also tip my hat to them for making a pretty accurate homage to the games of my early years.