Altitude is a 2-D arcade game where we fly small, brightly coloured airplanes around a map. Typically we have a bunch of other planes flying with us that are on our team and we have an opposing team with different coloured planes. Each map or mission typically has a set goal in mind. For example, in some maps we are out to kill lots of enemy planes, on another map we might be playing a form of airplane soccer and another involves bombing the enemy’s base before the opposing team bombs our base. Fairly simple concepts, but the wide range of maps and different types of airplanes provide a great deal of variety. 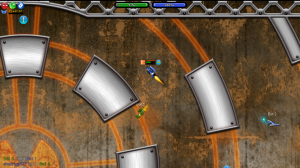 Every so often I come across a game that is just plane fun. (Plane fun, see what I did there?) Altitude is a game which beautifully combines many of my favourite gaming elements. Playing Altitude involves flying planes; game rounds usually last less than five minutes, giving players the chance to be as casual as they like; there are lots of solo missions we can play by ourselves and there is the option of joining on-line games so we can play against other people. As an added bonus there are very few controls involved for a flying game and (for double bonus points) the game includes a tutorial.

Basically, Altitude combines almost every characteristics I think a action game should have and the developers have done a great job making Altitude feel polished.

There are a handful of different planes to choose from. Early on we get a very nimble, somewhat fragile fighter. Then we gain access to some heavier, bomber style planes. Later on we get access to more capable and agile fighter planes. We also slowly unlock special abilities as we progress. These abilities give us increased power, stronger armour and so on. These abilities usually do not make a large difference while playing the game, but it does give us a slight advantage.

A bigger advantage can be gained from collecting power-ups scattered around each map. These tokens give us the temporary ability to shoot missiles, get short-term shields or drop barriers out the back of our craft. There abilities are usually good for helping us take out (or get around) one enemy plane.

There are a wide variety of maps in which to conduct missions. Some of these are fairly simple with wide open spaces and others are tighter, offering Pac-man like mazes. All in all I found there was a good selection to choose from. Some maps I liked and others I didn’t, I suspect most people will find a handful they enjoy.

Earlier I mentioned Altitude has a tutorial and the game starts us off with a series of simple missions. We’re taught how to fly which is a pretty simple process. In Altitude the left and right arrow keys change course and the up and down keys adjust the throttle. After that we are taught to shoot (the F key) and use secondary abilities and power-ups (D and S, respectively). Once we complete the tutorial we can go on some practice missions and start selecting different maps for our missions. As we complete missions we gain access to more planes and minor abilities.

Apart from having a good deal of flexibility and some very simple controls, there are two things about Altitude I really enjoy. One is that the game is easy to pick up, but hard to master. Flying the plane is pretty easy, but there are so many different maps, missions, AI difficulty levels and planes that it can take a very long time to master every possible combination. The availability of on-line multi-player games also opens a whole new series of challenges. The other thing that sticks out about Altitude is it feels polished. The game looks nice, the controls are smooth and quick to respond, the levels look well thought out and I encountered no glitches during my (ever increasing) time with Altitude. Early on I will admit there were battles in which there were a lot of planes and power-ups flying around and it could get a little confusing, but eventually the dust would settle. These little fur balls of action keep the game intense and, while I might not have always been clear on what was happening, I was having fun.

And that’s what I think is important in gaming: the fun. Recently I’ve played a bunch of dark games and edgy games and artsy games. These are all fine and good, but Altitude, with its bright colours and variety, feels like a celebration of gaming, of life even. While titles such as Limbo and The Plan are dark and emotional and create a sense of smallness in a vast, dangerous world, Altitude is a game that shares intense joy and silly fun. If Limbo is hanging out with the drama group while they practise The Scottish Play, then Altitude is joining the soccer team where everyone high-fives and claps and we get to go out for pizza after.