I know I’m coming a little late to the Limbo party, about five years late, but for some reason Limbo was always one of those games that I thought, “I’ll try that soon…” This week though I realized four games in my library are described as “Limbo like” and it occurred to me that if I am going to own (and review) all these games that are similar to Limbo then I should probably add Limbo to my collection. So I did.

I feel that was Step One in getting trolled by a video game.

When the game Limbo begins we are shown to be a small person (presumably a child) waking up in a dark forest. The game is presented in black & white and, for the most part, we can see only silhouettes of objects, including our character. The view on our screen is focused as if through a lens so that objects in the centre of the screen appear large and in focus while objects at the edges of the screen are blurry. If you want to get an idea for what the game looks like, imagine Charlie Brown having a nightmare in which he is lost in the woods. 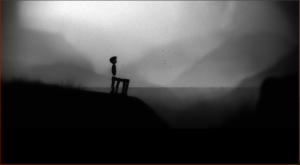 The basics of game play are very simple. We move to the right, occasionally moving objects, jumping over pits and climbing ropes. As we move to the right of the environment, we encounter barriers, traps and a GIANT FREAKIN’ SPIDER, but more on the eight legged beast later. Due to the game’s use of silhouettes, it is sometimes hard to make out exactly what an object is or how it will react when we encounter it. For example, it’s not easy to tell the difference, at first, between some grass and a bear trap. It’s also difficult to tell what is bits of twigs and what is GIANT FREAKIN SPIDER webbing that will stop us in our tracks.

Which brings me to a central theme of the game: death. Our character dies a lot. Now death in Limbo does not carry a large penalty, the game simply resets the current puzzle. We don’t have any objects to lose or a timer or anything critical to forfeit, we just have the minor inconvenient of going back in time to the beginning of the screen we are on. On the flip side, the player is likely to die quite frequently and one gets the impression the developer took a certain dark glee in setting up the traps. There are parts of the game where we might break a branch only to have a log fall on us. So the next time we break the branch and jump aside, only to discover a bear trap will catch us. So after a few tries we snap the branch, dodge the log, hop over the trap and (BAM!) land on a spike we thought was tall grass. In short, the game uses its shadowy imagery to hide things from us and it produces little scares that keep the player on their toes. In fact, I ran into enough traps, getting set back again and again so much, I began to feel the game was trolling me.

Sure, most puzzle/platformers are hard, or have difficult parts or jumps that need to be handled just right. But most of the time the existence of the problem is obvious, the existence of the puzzle is right in front of us in most games. The difficult part is working out a way around it. In Limbo the game keeps us on our toes by instantly killing us seemingly at whim, hitting us with stuff we did not see coming. On the one hand, this approach to game design is maddeningly frustrating at times. On the other hand, there is a certain genius at work because it means the player is always engaged. Whether we are dodging spike traps or running from a GIANT FREAKIN SPIDER or simply walking through a large, empty portion of the forest, we are always alert, always looking for the next thing that is going to try to kill us. Sometimes the empty parts of the game where I was just walking among the trees was intense because I wasn’t sure when something was going to pop up and snap off my head.

Okay, a little about the spider: Most of the puzzles and challenges in the game are parts of the environment: boxes, logs, ropes. But there is a reoccurring villain, a massive spider that stalks us on and off. We sometimes injure the beast and sometimes run away, but the thing keeps coming back and it makes the game particularly intense because not only do we need to evade the spider, we are also constantly looking out for it. Any moving tree branch or dangling rope could be a leg or a bit of web and the player needs to be constantly vigilant.

One more thing: the game can be frustrating at times because there are places where unusual or repetitive puzzles are introduced. For example, there is one puzzle (involving that damn spider) where we need to get the spider to stomp on the ground near us (not on us!) at least three times before something else will happen. This drove me slightly nuts because I thought I had the puzzle figured out, got the spider to stomp a couple of times; what I wanted to happen didn’t, and I spent a lot of time trying to figure out other approaches to getting past the monster. Eventually, I looked up a walk-through and found I had the right answer all along, I just needed to repeat the same process a few extra times. It was a fine example of the game trolling the player, making us dance to its sadistic drum.

Here is the odd thing though: As much as Limbo creates a sense of despair, as much as I felt trolled, as much as the flickering black & white art style annoyed me and set me up for constant death, I felt oddly compelled to continue playing Limbo. The game is unforgivably hard and intense and terrifying and bleak… so soul crushingly bleak at times, and yet I thirsted for more. There is something very rewarding about making it through a game this merciless and there is something endearing about a game that engages the player on such an emotional level. I’m not sure if I love to hate this game or hate to love it, but I definitely want more.