One of my favourite games to appear on mobile devices in recent years is Plants vs Zombies 2. It’s an interesting action/strategy game in which the player places plants on a chess-board-like grid. Then zombies walk onto the grid, eat the plants and attempt to make it to the player’s side of the board. Various types of plants either shoot projectiles at the zombies, slow the zombies, provide the player with more resources or block the zombies’ path. While PvZ2 has a very simple concept, the huge variety of game combinations that can be achieved using dozens of types of plants and dozens of different zombies is quite remarkable. Plus the artwork and animations are pretty good and the game throws in the occasional mission or goal to keep the player focused.

At any rate, given how much I have enjoyed Plants vs Zombies 2, I was quite happy to see a game pop up on Steam called Spartans Vs Zombies Defense. On the surface, SvZD has a similar concept. The player controls one side of the game world, zombies are rushing us from the other side. It is up to us to select troops to place in the way and take charge of the army’s leader, Leonidas. However, while the concept is similar and we do indeed pit our army of Greek warriors against a legion of approaching zombies, the two games have distinctly different styles. 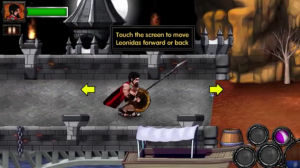 In Spartans Vs Zombies Defense we find the controls are quite simple. Most of what we do is instruct Leonidas to walk forward or backward. When a zombie walks into range, Leonidas will start hitting the zombie with his spear. This happens automatically. If too many zombies get close, they will overwhelm Leonidas and we lose the battle. Also, if zombies make it to the left side of the screen we will lose. At least I assume so, I never had zombies break through and take my castle.

Also, instead of placing plants, SvZD has us collect and slowly earn money. Basically the game slowly provides us with coins so long as we manage to stay alive. As we earn coins we can purchase soldiers to come fight with Leonidas. The soldiers aren’t any smarter than the zombies, they just rush straight into battle and quickly die if left without our help. So far as I could tell there isn’t any way to take control of the soldiers, we just keep buying new ones as the old ones get destroyed.

The graphics are simple, but I don’t mind that. Lots of great games have … spartan graphical styles. I think with tower defense games a terse graphical style might actually be of benefit as it prevents the eye candy from distracting the player. That said, while the concept behind SvZD is good, I feel the implementation lacks in a few ways. For one, most combat games give us some control over our character’s fighting style, but SvZD basically just leaves us in control of walking forward or retreating. The AI takes over hitting zombies (and getting hit by zombies) so there isn’t any skill involved in combat. There are power-ups we can use to take down more zombies, but this usually isn’t necessary. So long as we rush into battle and then slowly retreat Leonidas is nearly invincible.

I also feel like the game map should perhaps be smaller. Plants vs Zombies 2 has a fairly small map (it needs to fit on a mobile phone’s screen), where SvZD has a bigger map and it makes for a slightly less intense, less urgent style of fighting. We have more room to experiment in, which is nice, but I felt less like I was struggling against a horde of zombies at my gate and more like I was battling foes in a large arena.

As I mentioned above, the concept is good and I would like to see SvZD developed further. However, I also feel the game needs to engage the player more, make us more involved in the combat and the management of the army. The demo is worth checking out, but I’m hoping to see a sequel that will offer more intense game play.