I have arena envy. There are a lot of game concepts I like that involve arena style combat, pitting soldiers or tanks against one another. But there is a catch: I don’t like first-person perspective games and many arena style combat games are first person shooters. This somewhat limits the number of arena combat games I want to play.

Luckily, for me, there are some gems out there that combine arena style combat with third-person perspectives. One such game is Daedalus – No Escape (DNE). DNE offers the player a number of possible scenarios, maps and player combinations and then turns us loose to shoot the heck out of other players using a small selection of weapons. In this way we get all the wild, fast-paced combat of first person shooters with the steady top-down map view of real time strategy games. It is, for people like me, a win-win. 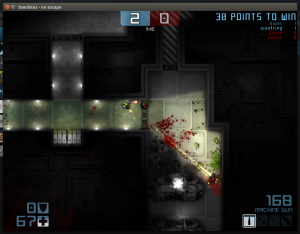 I think what I like most about DNE is that the game is quite flexible. Players can enter into arenas where it is every player for themselves, we can play on teams, we can vary the number of players on each team. When fighting against the AI, we can select from a range of difficulty levels. (I did well against low-level AI and got creamed against the hardest setting.) We can vary the length of matches and the number of points (or minutes) that need to be reached before a winner is declared. There are also a handful of different maps to choose from so we don’t get bored looking at the same layout each time.

Once we have selected our settings and are tossed into the arena, we start out with a machine gun and, by exploring, we can find additional weapons. There are pin-point accuracy laser style weapons, a rocket launcher (for those of us with bad aim) and bouncy grenades. Though there is a small selection of weapons available, I feel the developer has covered all the basics, giving us a range of combat styles to choose from. The only thing I felt was missing was mines or other form of trap that could be placed and triggered by unsuspecting foes.

One might think that top-down arena combat would lose the edge of excitement since the player can see everything around them. However, while we can view the map in its entirety, enemies are only visible when they are in our line of sight. Using the mouse pointer we can turn our character around and enemies only show up when we are looking in their direction. This allows the game to maintain a level of suspense and, at the same time, gives players the chance to sneak up on each other.