Last week several torrent indexing websites were taken off-line, probably the most popular one being The Pirate Bay. While websites that facilitate finding and sharing torrent files often carry a reputation for copyright infringement, many users visit places like Pirate Bay in order to find (or share) legally distributed information. Linux distributions, copies of FreeBSD, artists promoting their music, film makers offering pay-what-you-want video — all of these things are perfectly legal and quite common on torrent sites. The Pirate Bay site frequently featured artists who wanted to share their work in the hopes of drumming up attention and donations.

Sadly, when Pirate Bay and various other torrent indexing websites were taken off-line last week, the baby was thrown out with the bathwater. Many instances of copyright infringement may have been avenged (even prevented), but these torrent sites going off-line also took away an outlet for legal activity and positive sharing. Some might quibble over the ratio of legal to illegal activity or the morals of torrent indexes, but what I am interested in focusing on here is: How can those of us who download (and share) legal material continue to do so?

Some people claim torrent sites like Pirate Bay will come back on-line. Others assume another, new batch of websites will spring up (hydra-like) to replace the sites knocked off-line last week. Some folks are holding out hope for a peer-to-peer distributed model of sharing torrents and magnet links. There is good news for the people in this last group, distributed torrent sharing already exists. 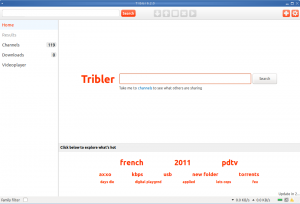 Tribler is an open source, cross-platform user-friendly solution for people who wish to acquire or share torrents without worrying about the point-of-failure associated with places like Pirate Bay. Using Tribler, people can search for torrents that are being shared right now, queue new downloads and share their own material. Tribler users can create “channels” of material and share files in these channels, making it easy for people to find content offered by a specific person or group. For example, Canonical could have its own channel for sharing copies of Ubuntu, an artist could release singles or demo albums in a specific channel. Users can “favourite” channels to easily find new, desired content.

The Tribler application features a simple, friendly interface and currently runs on all major platforms (Windows, OS X, Linux and FreeBSD). Using Tribler we can search for new items by name, download torrents and share our own material. There is no central website, no single point-of-failure and Tribler is offered up free of charge. The application is open source and anyone can check over the source code or make improvements.

If you want to share your data with the world, if you want to get free (and legal) content and you no longer wish to be tied to the fate of torrent indexing websites, then Tribler is the solution.