After my trip down memory lane with Neverwinter Nights last week, I wanted to keep to the fantasy genre for a while longer. Lately I’ve been hearing a lot of buzz around Dota 2, a game developed and distributed by Valve. Sadly, the hard part about getting into Dota 2 was discovering what the game is about. Unlike most indie games I’ve been playing recently, Dota 2 has a summary blurb right out of a Marketing 101 textbook which says a lot while not actually telling us anything of value. The trailer video isn’t any better as it appears to be complete devoid of any game play and, instead, looks almost identical to old World of Warcraft trailers.

I decided the only way to learn about Dota 2 was to download it and give the game a try. It’s a big download and, once I got the game installed and launched Dota 2, the first thing I saw was a survey asking how familiar I was with Dota 2 and its genre. Since I still didn’t know what Dota 2 was about, I had to admit I didn’t ever know what its genre was and I certainly had no familiarity with Dota 2 specifically. The game suggested I try the tutorial levels. 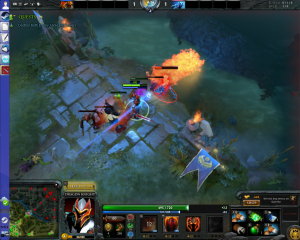 The newbie player (ie me) begins by being presented with a map and there is a status bar at the top of the page letting me know my tutorial quests are 0% complete. Great, now how to start the tutorial. I looked around the page, clicked on the map, the character profile, the menus… After about a minute of nothing happening I found I could click on the game’s world map and drag it around. This exposed markers on the map I could click to start a tutorial mission. Hiding the tutorial level seems either a cruel joke or an interesting way of weeding out unmotivated players.

At any rate, I soon found Dota 2 is a real time, fantasy themed combat game. We look down on a map where we see our character, shops, paths through the wilderness, foes and places we are supposed to defend. Left clicking an object or player highlights it and brings up information on the thing we clicked on. Right clicking on an area causes us to move to that area. So far so good. The game talks to us a bit about how to fight enemies (click on them once and sit back and watch), how to buy items from the shops and the game offers some basic tips on combat (hit enemies, try to avoid getting hit back).

Something that struck me as odd up front was the Dota 2’s graphics are quite good, everything is bright and easy to identify and some of the details on the player characters is impressive. However, the interface we are presented with is oddly buggy and, I found at least, difficult to navigate. As an example, moving the mouse to the edge of the screen causes the view to shift so we can look around our character. Likewise we can use the arrow keys to move the view up/down or left/right. This motion is extremely choppy and tends to shift too far away from the player very quickly. Using the mouse only worked for me when I wanted to scroll up/down, but I had to use the arrow keys to change the view left/right. The text on the screen is often small and hard to read, which becomes a serious drawback as the game is throwing us into real-time combat. Sometimes I’d get halfway through a potion’s description before realizing I was under attack by a foe hiding under my inventory window.

Still, I want to give the game credit. The tutorials do a good job of walking us through how to fight and how to manage our inventory. There are dozens, maybe hundreds of items, plus combinations, plus skills we gain as we level up and lots of spells/abilities to consider. The game does a great job of showing us how to use these, though why to use each feature and when is left up to the player to figure out. I waded into the early missions, stabbing, swinging, shooting and casting spells. So far, so good.

After four or five of these missions I felt I had the hang of things. I was winning battles, I was avoiding getting killed (most of the time) and I was taking out enemies defences. Plus, I’d picked up some basic strategies that were working fairly well for me. The interesting (and difficult part) was finding out which character classes suited my style. There are archers, mages, warriors, clerics and many other characters to choose from and it can take some experimenting to find out which ones suit a particular approach or mission.

After a few days of playing with Dota 2 in my spare time I realized something unfortunate: I was bored out of my mind. To understand why, I first want to talk about life and death. Not in the real world or philosophical senses, but strictly focusing on how Dota 2 deals with death. When a player or other character dies in Dota 2, they disappear from the map, their attacker gets money (and experience points) and then there is a wait — maybe around 15-20 seconds — before the character respawns back at base. This makes the game pretty fair and balanced as death is an inconvenience while allowing everyone involved to keep playing. The problem, I found, boiled down to two things.

First, having enemies, even enemy heroes, respawn after a handful of seconds is very annoying. It means we are essentially fighting an endless wave of soldiers with our own endless wave of soldiers. Sure, the tide turns one way or the other for a while, but eventually one side moves far away from their own spawn point they can no longer keep up with the enemy’s respawn rate and they get pushed back. The battle turns into a sort of teeter-totter where you hope you will push a little further into enemy territory long enough to take out their assets before getting pushed back and forced to defend your own. A simple capture-the-flag mission can wage on for twenty or thirty minutes with virtually nothing happening.

Second, while the respawn time is too short for the player’s team to achieve much, the respawn time is long enough to put a serious drag on the player’s flow. A few weeks ago I covered Zigfrak, a game where the player is disabled for brief periods. The key word in that sentence is “brief”. In Zigfrak I don’t think I ever waited more than five to ten seconds for my ship to resume flying. In Dota 2 the delay was typically closer to 15-20 seconds and it was long enough that I mentally disengaged and started thinking about other things I’d rather be doing.

As you can probably tell by this point, I didn’t enjoy Dota 2. Part of that was the interface, which at times simply stopped responding to keyboard input. Part of it was the long delays waiting for my character to respawn. Part of it was the massive shop where only a few items seemed to be of any use. Mostly though it was the sense that I wasn’t accomplishing anything. In a particular mission it didn’t matter how many dozens of times I killed enemies, they always respawned. There was no sense of progress, no sense of working toward a goal other than to complete the mission. I wasn’t fighting for anything or trying to save something, there was no motivation other than a vague desire to win in this specific arena fight. There was the occasional thrill of taking down an enemy hero, but that feeling was dulled by the fact I knew they would be back in under a minute. I didn’t even have a sense of skill being involved since it seemed if I just stayed alive long enough and gained enough levels, eventually the tide wold turn in my favour and I’d win, sometimes without even being directly involved in accomplishing the mission’s goal.

All that begin said, before the hordes of Dota 2 players decend on my inbox, I do understand why people like the game. I get the thrill of arena themed combat (I used to be a huge Sub Space fan), and I like the fantasy aspect. Dota 2 is a little like World of Warcraft without the planning, a little like Neverwinter Nights without the story, just straight on combat, the thrill of the fight all the time. No distractions, no big penalty for dying, just the ring of sword against sword. I get the excitement and the rush and the pleasure of competition. However, I’m currently in the mindset that I want the opposite of what Dota 2 is offering. I want the story and the consequences and the strategy, with or without combat. In my eyes, while I see why others enjoy the charge into battle, I regard Dota 2 as being a fantasy game with the story removed and only the grind remaining.