I was hesitant to review Neverwinter Nights as it is an older game, one which I do not think is even available for purchase anymore from its publisher, BioWare. However, Neverwinter Nights holds a special place in my heart and it is still possible to find the title in some web stores such as GOG.com. Plus, Neverwinter Nights is one of the first Big Name games I can remember seeing ported natively to the Linux platform and I think the game deserves a tip of the hat for that feat. 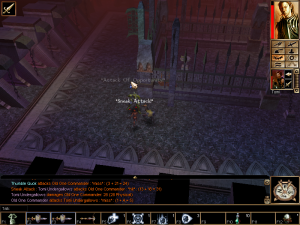 Up front, I want to say the interface for NWN is fantastic. I don’t think I’ve ever encountered a game interface that felt so natural. Players can manipulate most of the interface, the character, items and spells using either the mouse or the keyboard. NWN has a nice quick-slot feature that allows us to assign any action to a key (or key combination). This means we can set up our character to perform just about any action with the press of a button and this makes controlling the character quite smooth, especially in combat.

The plot of NWN was a pleasant surprise also. Unlike many adventure games, NWN has a fairly complex plot and many sub-plots. The main thread of the story is split into four chapters, each chapter taking several hours to complete. In each chapter we encounter game characters who get us caught up in their stories and there are several dozen of these side stories. While the main plot of the game involves the usual sort of hero stuff (big armies, dragons, end of the human race, etc) there is a great human touch to the sub-plots. We see rich stories in the minor characters, involving love, loss, misunderstandings, betrayal, revenge and loneliness. What I especially enjoyed was that elements of the game are in a grey area, ethically speaking. For example, one sub-plot involves a conflict between a young man and a young woman. The man has given a family ring to the girl, only to have her leave him. His heart is broken and he wants the family heirloom back. The young woman claims the ring was a gift and she should get to keep it. The player is asked to help them sort out the problem. This brings me to another aspect of the game I greatly appreciated.

While the central plot needs to move forward in a fairly linear way, the game is very flexible on how we tackle side quests and minor story elements. We can be a reasonable force of good, a hero-for-hire or even an outright brute who takes what he wants and kills without provocation. Take the above ethical dilemma, the hero might negotiate a truce and make both young people happy, or he might offer to buy the ring and return it to the young man, or he could kill both former lovers and take the ring for himself. The game is pretty open, allowing us to be as good or evil as we like in almost all scenarios.

There were two aspects to the game I found I didn’t like, preventing it from getting a perfect 5/5 stars. The main issue I had was with the player’s henchman. At each stage of the game we can have a side-kick travel with us. Typically the side-kick is there to compliment the player’s character. For example, if we are a wizard we might need a warrior to protect us physically. A paladin might take along a rogue to pick locks and disable traps. This henchman system is a good idea as it gives us a small party of characters and it is very hard to complete the game without a henchman. The side-kicks all have their own stories and these unfold as the game advances. The problem with henchmen is they are pants-on-head stupid. Henchmen constantly run headlong into battle, even if they are not a fighting class. Henchmen will run into traps too, even if they see the trap, if there is an enemy on the other side of said trap. Henchmen also get distracted easily and will often run off, triggering traps and getting attacked, even if they have been ordered to stay close. This means the flow of the game is constantly interrupted as we need to stop and go back to base to get our side-kick resurrected. In the end, while henchmen provide extra muscle during a fight and are usually necessary to complete the game, they are also the biggest source of frustration as they have a constant death wish.

The second issue I had was that NWN is a huge game. While much the game, especially early on, is rich in story and interesting moral choices, the game starts to drag around Chapter III. The maps remain large, but they feel somewhat empty and I found myself exploring map after map where my sole purpose was to kill everything that moved. After a while the process of entering an area, slowly killing everything in sight and moving to the next map got tedious. Perhaps this routine got more tedious in the third chapter because, by then, the enemies have so much armour that it takes a long time to kill off even the low-level enemies. Combat can almost come to a stand still if both sides are well armoured.

In the end, I think NWN is one of my favourite all time games and I love that it was ported to Linux about a decade before platforms like Steam and GOG started supporting open source operating systems. The game is huge, the characters highly detailed and the sub-plots a lot more interesting than what I’m used to in the fantasy RPG genre. I especially like the vast range of ethical choices the player can make and that alone made me return to the game a few extra times to play through the same story using different styles.