In recent weeks I’ve been focused mostly on reviewing games which run on Linux (among other operating systems), but most of them are closed source games. This week I wanted to get back to reviewing gems of the open source community. This week’s entry has been around for many years, but playing it never gets old.

Liquid War is perhaps one of the most unusual, colourful and fun tactical games I’ve played. The concept is quite interesting. Each player (typically one human and several AI opponents) is assigned a colour. Each player is then given hundreds of little dots (pixels or soldiers or grains of sand, depending on how we want to think of them) and all the players are thrown into a map. Maps vary in size and style, but many of them (viewed from the top down) form a picture of an object or animal. The player guides her dots around the map in an effort to outflank the other players. Once the enemy player (or players) is surrounded our little soldiers slowly swarm in, capturing the enemy dots and converting them to our team. 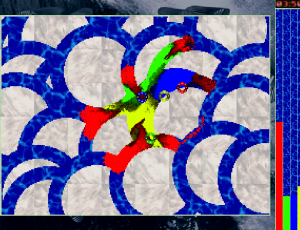 Essentially, what we are doing in each map is trying to capture all of the enemy pixels and convert them from the other team’s colour to our colour. The easiest way to capture an enemy dot is by surrounding it with our own colour. Enemy soldiers grow weak when we approach them from behind, but remain strong when facing us. However, they can change direction at any time, which is why the best strategy is to surround the enemy. As we convert more soldiers to our team our strength grows and the enemy weakens until, eventually, there is one player left standing.

One of the things which makes Liquid War so interesting is the controls. All we have to work with during a battle are the arrow keys. We manipulate a target on the screen and all of our soldiers run straight for the target. This means we cannot manipulate small units of our pixels, we need to coordinate them as a group. This can get tricky if we want to go in one direction, but the enemy is approach from another side. We need to balance turning our soldiers to face the foe while trying to move the group in another direction. It takes a little practice.

What I like about Liquid War is the game is super easy to pick up and play. One or two games (averaging under five minutes apiece) is enough to teach us the basics. After that the game is typically easy to play against AI players. The fun, I found, is partly in challenging myself to take on more and more players in less and less time. I also like the variety of maps, there are many from which to choose, and each one offers its own challenges…. or just something cool to look at.

Liquid War is one of those casual games that can be picked up and played for just a few minutes or we can keep playing round after round for hours. It’s a lot of fun, easy to learn, has a simple concept that scales up well with additional players and … well, the battles are oddly pretty with the mixture of colours flowing into each other. Liquid War is as much player-created art as it is a competitive tactical game. I’ve been playing it for years and see no end in sight. Give the game a try, if for no other reason than it is unique in its style.