One sure way to make me yawn is to describe an adventure game as having turn-based combat. Putting turn-based combat in a fantasy quest is a bit like icing a chocolate cake with tofu: it’s dull, slow to get through and completely removes any sense of excitement we had previously felt. Combat, by its very nature, should be the pulse-pounding part of an adventure. Combat is where the danger is, it’s where we should be making difficult snap decisions! Turn-based combat tends to slow down the game, making combat the least interesting, most tedious part of the adventure. Or so I thought.

Bravada is an adventure game created by Interbellum and available on Steam. In the game we role play a young dwarf who explores the nearby forest, goes on quests to secure hen houses and longs for a glorious beard. Most of the game involves us watching our character walk through long, linear maps collecting items, gathering allies and vanquishing foes. Between maps we are treated to story cut scenes which are wonderfully funny and (other game developers take note of this next feature) skippable. 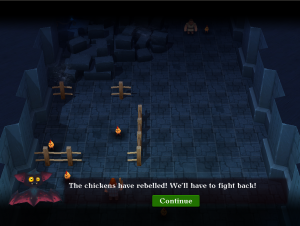 Bravada has a fairly simple animation style which is light in tone and colour. The game is pretty in an uncluttered way and I really liked the lighthearted style of the artwork. The interface is beautifully simple and easy to navigate. While Bravada is a role playing adventure, it does not get bogged down with vast menus and options the way many RPGs do. Leveling up and upgrades happen automatically, inventory is mostly automated and we don’t need to micromanage our characters. Healers automatically heal other party members, archers shoot, melee fighters bash and characters eat healing items without our intervention. In short, Bravada is an RPG game that takes all the grind out of RPGs and replaces it with humour and fun.

At the beginning of this review I mentioned turn-based combat and I was worried about this going in. What I found was the Bravada developers were able to take the concept of turn-based combat and make it so smooth that it feels more like real-time arcade style combat. And I was impressed. In Bravada we do not need to handle the details of combat. The player’s adventuring party walks as a unified group so all we need to do is move our characters close to a foe. The members of the party automatically pick their best attack for the encounter and the enemy characters do the same. A melee with six combatants takes around fifteen seconds from start to end, each combat round is probably about five seconds at the most. This comes back to what I said before about Bravada automating the boring parts of role playing games. We control the big picture stuff, where people walk, which equipment to use and how our party is arranged in formation. The game takes over the tiny details. This makes the game fast paced, surprisingly smooth for an adventure and largely removes any grind. It also lets us focus on the story. Or, since the story is mostly a thin excuse for the adventure, it lets us focus on the humour, which is thick in this game and it keeps the tone pleasantly light.

I played the demo of Bravada which features three missions of around five to ten minutes each. Each one is amusing, introduces us to new characters and slowly adds new weapons or other useful items. At the end of each level we get a boss monster to fight and a little more story. I am happy to report that, at the end of the demo, I very much wanted to find out what would happy next to the hero. He’s a lovable, silly character.

Bravada is a RPG that swaps out grind for adventure, makes turn-based combat fun and avoids micromanagement. It is a gem in the RPG indie market and a lot of fun.