After the serious retro style gaming and the survival suspense gaming I did last week I was really looking forward to trying something with a lighter tone. Which is why the game So Many Me grabbed my attention. The game is a platformer in the Super Mario World style and is described thusly:

“You play as an unassuming green blob named Filo, who has an incredible ability: to control his many, many clones — referred to as the `ME’. These clones possess all sorts of fun abilities that can be used to solve puzzles throughout the game.” 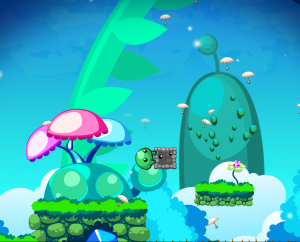 So Many Me is bright, colourful and features big balloon text in its simple menus. Its appearance basically screams, “I am friendly! I am fun!”, it also looks remarkably like a game for kids with its pastel palette. And while the game will probably speak to children, with the smiling faces and goofy-looking characters, I think the puzzles in the game will engage adults too, but I’m getting ahead of myself.

The game is a fairly traditional puzzle platformer. We control a small blob creature which walks around the screen and leaps in the air. The basic idea of the game is to get our blob character from the left side of the map to the right. As we travel we jump over pits, hop on the heads of our foes and collect bonus items. This part of the game is pretty standard stuff and only really remarkable for the pretty graphics and wonderfully smooth controls.

What sets So Many Me apart is the fact that, as we explore, we discover more blobs which look just like us. These blobs, once encountered, follow us around, perfectly mimicking our movements. Basically, we have an adorable clone entourage. But here is where it gets interesting. These clones can be directed to perform special actions. Early on, for example, we can direct our clones to turn into blocks which hover in the air. These blocks can act as platforms or block incoming enemies or hold down buttons that control machines. Blocks can be turned back into ME blobs at will, making them a sort of cute Lego block that follows us around. Later in the game we collect more of these ME characters and gain additional powers, such as being able to turn ME clones into trampolines.

Apart from this great gimmick of turning our clones into blocks and back again, the game has some really well constructed puzzles. There are all sorts of buttons, force fields, moving platforms and the occasional foe to dodge or manipulate. This makes the game resemble a happier, 2-D version of Portal at times, where we need to put blocks on certain buttons to advance. I also liked that the game allows us more than one way to get through some areas. At first I was playing just to get through the levels, taking a direct route from the beginning to the end. In doing so I missed some of the bonuses and went back to collect more ME units and items. In exploring the levels more I found some more puzzles and, in some cases, found there were multiple ways to approach challenges. This gives the game some replayability.

So Many Me might be designed for kids more than adults, but I had a great time with it. The game has the simple charm of classic platform games like Super Mario with the puzzle solving of games like Portal and the exploration factor of games such as Trine. This, along with smooth controls and bright graphics makes So Many Me a lot of fun and I highly recommend it for both kids and kids-at-heart.