Braveland is a modern take on a classic gaming style, specifically turn-based combat. As the game opens we are told we live in a fantasy kingdom and our village has recently been pillaged. Our character dons his father’s armour and takes off after the bandits, hoping to return the village’s goods and extract revenge. 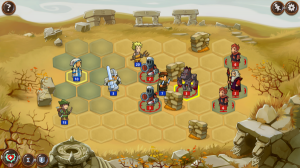 Braveland is basically divided into two parts. The first is the map where we decide where to go next. Early on this map is quite linear, but it branches out a bit later, giving us some choices as to which challenges we want to tackle next. Points on the map feature friendly people (who join our merry band of adventurers), shops (where we can buy items and upgrade) or enemies. Landing on an enemy marker opens the second part of Braveland, the combat screen.

Combat in Braveland is pretty straight forward. The battlefield is laid out in a grid of hexagons. We start on the left side of the screen and the enemy appears on the right. Each character gets a turn to move and to engage in combat. The order of the characters moving is mingled, meaning I move a character, then the enemy moves a character, then I move another character and so on. This does a nice job of maintaining flow during turn-based combat and avoids long waits during large battles.

Early on our group of adventurers is small and features only melee fighters. Soon we gain archers with ranged attacks and, later in the game, magic casters become available. Combat is quite simple to command. Our character is highlighted at the start of its turn. We click a hexagon where we want to move or we click on a foe we want to attack. The game fills in the blanks, moving the character and selecting an appropriate attack.

The game features three levels of difficulty. On the Easy level we can pretty much walk through the game, taking down foes with little damage. This is great for beginners and insures a gentle difficulty curve. As we become better at figuring out what each of our characters can do and how to best use them in combat we can raise the level of difficulty.

Braveland is a fairly simple game with relatively simple graphics. The game has an almost child-like quality to it in its straight forward approach and easy controls. As virtually all controls are simple “point-n-click” actions, I suspect this game would fit right in on mobile devices.

Usually I shy away from games featuring turn-based combat in fantasy realms because combat can get dragged down. Often times turn-based combat means complexity or long wait times while everyone cycles through their various attacks, items and spells. However, Braveland does a really nice job of keeping the flow of the game moving. The AI and player turns are intermixed, combat is kept simple so we don’t need to dig through inventories and fights are usually short, keeping the game moving. Braveland may not appeal to hardcore gamers and fans of classic turn-based combat games, but I suspect Braveland will be welcomed by more casual gamers who like the concept turn-based combat, while keeping things light. This game is also ideal for younger players as the narrative is light, the combat is not at all gory and the interface is straight forward.

Braveland is not the sort of game one gets lost in, grinding or building a complex story. Rather it is a nice distraction, a pleasant trip into classic turn-based style of games with a modern appeal.