This past week I sat down and started playing two games (because I’m greedy that way). The first game appeals to my programmer side. It’s a retro, hacking themed game that combines first person shooters with a TRON theme. The game is called Black Ice and everything about it feels like the game crawled out of either TRON or the film Hackers. 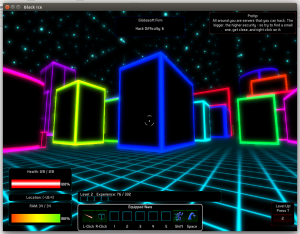 The concept of Black Ice is fairly simple. We walk around a map populated with buildings (servers) and right-click on servers we want to break into. Clicking on a server causes a bunch of baddies to pop up and attack us. We shoot the baddies and gain points for defeating the server. The concept is simple enough we can get by pretty easily without a tutorial and there is even a practice level available to let us get a feel for the controls.

The graphics in Black Ice are quite basic in a 1980s sort of way and I believe this is done intentionally to give us that authentic Hackers/TRON/C64 feel. The game gets us to move around with the keyboard and we aim and shoot at baddies with the mouse.

While I like the general concept and the retro feel, I suspect Black Ice works best as a multiplayer game. I only had a chance to play the single player campaign and (alas) had no one to either shoot with me or at me. The simple style and objectives of the game meant, for myself at any rate, that once I had “hacked” a few servers there wasn’t much else to hold my attention. I’d pick a server, wade into a crowd of baddies, fire wildly for a few seconds and it would be over. The game, while brilliantly easy to pick up and start playing, does not offer a single player much in the way of challenges. I think this is why the game has a multiplayer feature, to allow people to essentially extend the game with their own creativity. We are given maps, guns and baddies, but the real fun probably comes in the form of friendly competition between players.

The other game I tried this week was the demo edition of Survivor Squad. Unlike Black Ice, where I was immediately intrigued by the concept, Survivor Squad had to work to win me over. I’m not a big fan of survival games or horror so anything with terms like “survivor”. “zombies” or “infected” tend to turn me away. That being said, I opted to give the game’s demo a try and settled in to see what it had to offer. 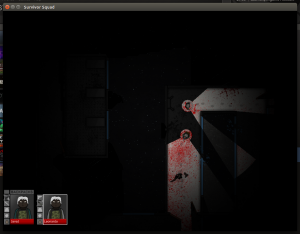 One thing which immediately caught my attention is that Survivor Squad does one thing differently than most survival games I have seen before. Many survival/horror games feature a first-person perspective (or closely third-person, looking over the character’s shoulder). I suspect this camera perspective is commonly used to both limit the player’s field of vision (more suspense) and to put the player more firmly into the character’s shoes (again, more suspense). Survivor Squad presents us with a top-down map, a bird’s eye view of the area. We then control our characters by left-clicking on them and right-clicking where we want them to go. This makes Survivor Squad feel more like a real-time strategy game than a member of the suspense/horror genre.

When the game opens we are alone in the dark with a flashlight, wandering through a building that is empty (save for blood on the floors). In short order we meet a wandering infected creature (zombie) and an ally who shows us where to find weapons. From there the game basically starts introducing us to a series of new maps/buildings where we can go in, search for supplies and fight zombies. We amass more supplies, the zombies get more numerous and the game gets more intense.

Early on I struggled a bit to figure out the controls. It took a while before I got into the flow of moving my characters together, maximizing my field of vision with the flashlights. (The missions always seem to happen at night.) I also found I wasn’t sure some of the time if clicking on an enemy attacked it or not. Sometimes I seemed to make my characters shoot sooner and score kills, other times it seemed my efforts were wasted and the zombie would get into close melee combat with my characters. One other thing I wondered about was what caused the zombies to do one thing or another. Sometimes they seemed drawn to sound, other times they seemed to ignore me banging about. Once or twice it seemed a zombie was stalking the beam from my flashlight, but other times I could shine the light directly in front them and the zombies would ignore the light. So I sometimes struggled with the idea of whether zombie actions were random or not. Luckily the game’s difficulty curve is gentle enough we can take our time learning these things. The first few areas are basically practice arenas.

As I indicated above, I typically don’t go for the survival/suspense style of game play. However, the top-down, group organizing style of Survivor Squad appealed to me. I liked planning my routes, finding hidden supplies and trying to figure out whether I could tackle another group of infected creatures or if I should try to go around them. I made a lot of mistakes early on, but the game was politely forgiving and I ended up having fun with it.