A few weeks ago I turned my focus to two games, Violett and Unrest, featuring women as the main protagonists. We don’t get to see many women taking lead roles in games and I wanted to share some rare exceptions. Little did I know at the time that the next game recommended to me would be Munin, which also happens to feature the adventures of a female lead. (My cup runs over.) Munin is a game about a raven, in female human form, who is on a quest to find her feathers. It’s probably best not to worry too much about how this raven became a woman and how finding feathers will turn her back into her proper raven form. Instead, let’s look at a description of the game play:

“Imagine you could move mountains – literally! With realistic physics, Norse runes, rotating platforms and a lot of gray cells you’ll help Munin, Odin’s messenger in her very own 2D-adventure, to reclaim her power on a journey.” 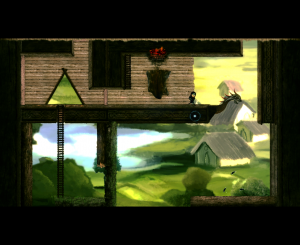 Munin is basically a puzzle platformer game in which we walk about a level, collecting black feathers. Once all the features in a level have been picked up, a raven swoops in and takes us to the next level. The puzzle platform genre is well established and I won’t go into many details about the controls and movement other than to say they work reasonably well. My only complaint was that there doesn’t appear to be any way to reassign movements to alternative keys.

The gimmick that sets Munin apart from most other platform games is that we can use our mouse to rotate parts of the level. This means that instead of figuring out how to climb or jump or go around objects, we generally move the objects to form pathways for us. Each level has pieces that can be rotated (other areas remain static) and we turn these regions clockwise to align them to our purposes. There were two limitations to this power. One is that the scenery always turns in the same direction, there does not appear to be anyway to rotate the level counter-clockwise. Also, we cannot rotate a piece of the level if we are standing in it. We must step outside a region prior to moving it.

Munin has a pretty gentle difficulty curve. We start out with a few levels where we basically just walk through and then we are given a level with one moving piece, followed by levels with multiple rotating areas. Later we run into levels where regions need to be lined up to cause our desired feature treasures to appear. Traps and other features are gradually introduced as well.

For the most part, the game works the way one would expect a platform game to work. Spikes harm us, fire harms us, endless drops off the bottom of the screen kill us. I was pleased to find Munin can fall any distance on the screen so long as she lands on a platform. In fact, falling long distances is sometimes a requirement and causes no damage.

The only real problem I had with Munin was not an issue with the game, but with myself. I greatly enjoy platform games, the jumping, the running, the little puzzles that unlock the next area. All of these appeal. However, for some reason, my brain went to mush when trying to figure out how to manipulate the level to suit my character. Usually I move the character to suit the level and trying to do this the opposite way completely gobsmacked my mind, more so than games like Portal did. Personally, I feel this is to the credit of the Munin developers, they made a nice game with a gentle difficultly curve and smooth controls and still managed to mess with my mind. My hat is off to them.

Munin has smooth game play, simple controls, a neat concept and nice, retro graphics. It is well worth giving the game a try. Munin is available on Steam and there is a demo in case you want to try before you buy.