“Monochroma is a cinematic puzzle platformer. It’s a game about being a kid, growing up with a little brother that needs your help, facing obstacles, and solving unique puzzles in a dystopian 1950’s setting.”

I almost skipped trying Monochroma. It had “artsy indie game” written all over it, complete with noir graphics, small children and a big, scary world. The child/horror genre doesn’t resonate with me. Maybe it is because I don’t like being scared during my relaxation time or maybe it is because I have trouble putting my adult self in the shoes of a child or perhaps it is because I don’t like seeing bad things happen to innocent children. Whatever the reason, I scrolled past Monochroma, but then got drawn back to it. I think it was the promotion blurb’s talk of puzzle solving which pulled me back. 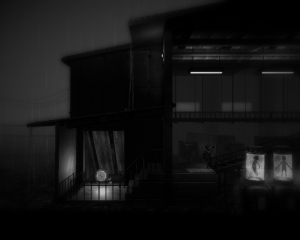 At any rate, I ended up playing Monochroma which features two brothers. We control one brother, the elder one, and the game starts off light and happy. The two brothers are running through open fields, jumping over objects, climbing on top of things. The beginning of the game is a sort of trouble-free tutorial or sandbox where we can run, jump and get a feel for the controls. A few minutes into the game the two brothers fall and the younger one is injured, forcing us to carry him. There is no dialogue or text so I suppose we are carrying the young lad home or to a hospital. As we go along we face a series of increasingly complex puzzles and here is where carrying the brother gets interesting.

While carrying the little brother we can move, climb and jump, but not as well as we can when we carry no load. Obviously, this means to complete most puzzles we need to put the younger fellow down. However, there are limitations placed on us with regards to where he is set down. The little fellow will only agree to be put down if he is in direct light, apparently being scared of the dark. We also cannot wander too far away from the little guy or he panics and we are forced back. This means we can’t just put him down, go find items to help us solve a puzzle and then go back to get our younger sibling.

Early on a lot of my game play was experimental in nature. I wasn’t so much solving puzzles as I was finding out the limitations placed on us. For example, we can fall from a pretty high height, but not too high or our character will die. We have to be careful to set down our brother in light, where it is safe, and not wander off. Touching fire or water does not appear to hurt us, but touching gasoline results in immediate death. Some items we can grab and they hold still while others can be moved. It is learning these little quirks that made the game interesting for me early on. Once I got into the swing of things I felt there was a certain enjoyable flow to the game. At first the game is fairly open world with a few obstacles. As we progress the puzzles get slowly harder and not only logic, but also timing, comes into play.

The game also becomes darker as time goes on. At the start the environment is sunny and the children are playing. Then the environment darkens, then the rain starts. The world goes from large and happy to large and scary, to closed and cramped. What starts as play time turns into a nervous trek through a dark, scary environment. A short time in, the game steps things up by showing us more disturbing images and the tone shifts from small, scared kids in an indifferent world to potential victims in a hostile one. Personally, around this time, though the puzzles were getting more engaging, I started to lose interest. Two plucky kids taking on a big, dark world was encouraging and artistic. Two children fighting for their lives in a warped dystopian setting just felt creepy.

It may sound, based on the above description, as though I don’t like Monochroma. I believe it would be more fair to say I dislike the genre of small kids in a hostile noir setting. I actually have high praise for the developers of Monochroma. The game does a lot of things right. The world feels appropriately big and formidable, the graphics are well done, the sparse use of colour is very nicely executed. The puzzles are generally interesting and the learning curve is pretty reasonable. I will also say this: I am usually not a fan of games which focus on escort missions. I find escort missions usually rely heavily on a helpless and/or stupid character bumbling about while we try to save them and it tends to make the player dislike the person/thing they are escorting. In Monochroma I found the opposite to be true. The little brother does not wander off or do anything dumb. He sits where we put him, he does not do anything to bring about his own demise (though he can sometimes die if we fumble a puzzle). Without any speech or text the developers managed to make the connection between the two brothers solid, their love is apparent in their actions, interdependence and trust. This game may be one of the first to make me appreciate what is essentially a long escort mission and I applaud the developers for that feat.

In short, if you like the small child in a big world genre or if you are a fan of puzzle platformers, then Monochroma is probably one of the better members of the genre. It is artsy, it is touching and it is a bit creepy. (It is also available as a free demo if you want to try just a taste.)