I have said before that I tend to shy away from real time strategy (RTS) games. I am a big fan of single-focus, fast-paced games like platformers and I love the considered and slow-paced movements of turn-based strategy, but mixing the two together tends not to work for me. Combining a lot of elements and considered strategy in with a fast-paced environment just turns my brain to mush. So it was with some very cautious optimism that I downloaded a copy of Warzone2100, a real-time strategy game which takes place in a post-apocalypse world.

The basic idea behind Warzone2100 is that society has, in the near future, collapsed, leaving pockets of humanity scattered around the world. We have a minimum amount of resources and technology (some tanks, trucks and basic building tools) and, from that, we must rebuild a strong society. As we grow in the game we expand outward, gathering lost artifacts of technology, developing new tools and mapping more of the world. Of course there are other bands of people who are also developing, expanding and exploring and these other groups tend not to be friendly. As a result, much of the game depends on us defending our territory while destroying the bases of the competition in a sort of capture-the-flag form of game play. 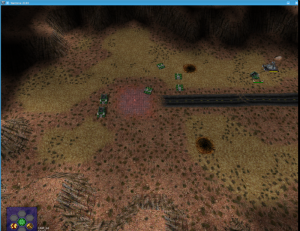 What really pleased me about Warzone2100 is that it offers a fairly gentle learning curve. When I played, for example, 0 A.D, I found that the game, even on the most simple levels, killed me off fairly quickly. This may motivate some people to try harder, but I find that a game which is difficult to pick up straight out of the gate tends to discourage me. I need to get hooked before I feel the need to prove myself. Warzone2100 is quite nice in this regard. We can start with a tutorial mission where we are walked through setting up the basic infrastructure our society needs (base camp, resources, factory) and then it lets us explore. The tutorial map does not include any combat, so we can wander around, poke at stuff and get a feel for managing our resources. The first real mission in the campaign mode introduces combat, but the AI is pretty defensive and, for the most part, lets us come to it. This makes the first map fairly easy, even for RTS-challenged people like me.

It did take me a little while to get the hang of juggling research and production, it did take some fumbling before I got the hang of a good defence/offence strategy, but Warzone2100 was patient with me, letting me get used to the controls and not wiping the floor with me, at least not at first. This led to a fairly steady flow of game play where I gradually got better and the game slowly got harder, usually at about the same rate. I especially like how straight forward combat is, the player’s units do a pretty good job of fighting for themselves without needing much fine-gained interaction. We are more or less free to focus on the big picture.

If I had to quibble over any aspect of the game it might be that the graphics are beginning to look dated. This is a small thing when compared next to the game play and not a big deal, typically, for RTS games, but a potential player should know the graphics are somewhat basic. Functional, certainly, but not amazing. I also feel that, at times, the player’s objectives are a bit vague. Typically the objective seems to boil down to either “find a thing” or “defeat the enemy” or both. There were times when I would be slowly expanding my little nation and wondering, “Now what?” Typically though, if I kept exploring outward, I would eventually find something interesting — either something that wanted to kill me or something I could use.

While I feel there is still more of Warzone2100 left to discover, I have to say my impression of it so far has been really good. Much of this positive impression comes from the gentle learning curve, part of it is the ability to play either against the AI or with another player. I like the flexibility presented in the game play options. I also like that the game does not dive me crazy with repetition. Often times I find RTS games repeat the same steps or the same one-liners of dialogue over and over as we interact with the units. Warzone2100 is relatively automated and relatively quiet. We are told when new units are constructed, but the game does not feel the need to say “Aye, sir” or “We reached our destination” every few seconds. I like that the game mostly just tells us about important things, such as completed units and enemy attacks, without keeping up a constant stream of reports.

The list of RTS games I have played and enjoyed is short, probably less than half a dozen titles all told. Still, Warzone2100 gets the questionable honour of being my favourite to date. It is well put together, there were no big problems, no glitches that I noticed and the game starts easy and gradually ramps up, making it (I believe) appealing to a wider audience. You do not need to be a RTS expert to pick up this game. It certainly won me over and I am a hard sell when it comes to RTS titles. If you try Warzone2100 and enjoy it, the project does accept donations. I feel the developers have certainly earned a token of appreciation.