The Open Racing Car Simulator (or TORCS) is a 3-D racing game that features cars driven by virtual humans rather than fuzzy animals, open source mascots or plumbers. This sets TORCS apart somewhat from most of the other racing games I have played recently. Realism has been lacking in my racing games of late and I was curious to see how I would do when forced to drive without the aid of cartoonish power-ups.

The first thing I noticed, once I got TORCS up and running, was the graphics were quite good. Racing games, especially open source racing games, tend to suffer from poor graphics and that has been a concern of mine in the hunt for a good racing game. TORCS gets good marks for its graphic quality and the style of images and tracks remind me of the Need for Speed series from the late 1990s/early 2000s. Some tracks, for example, I recognized right away from having seen them on television or other realistic racing games and I think that speaks well of the work done by the developers. The second thing which soon stood out was that TORCS has quite a bit of variety to offer. In the version I played there were many tracks of a wide variety of types (road courses, ovals and dirt tracks were featured) and I believe more can be downloaded. There are also a variety of cars (around half a dozen in my default installation) and a handful of computer-controlled opponents. The number of courses, AI opponents and cars means we can mix-and-match for days without repeating a combination. TORCS also features a variety of race styles, including endurance runs, quick races and championship events. For the most part I stuck with quick, one-time races against a handful of AI opponents. 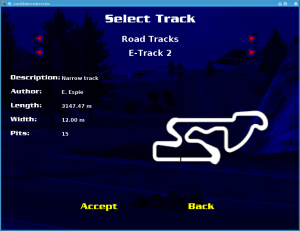 However, the important questions are: How are the controls? How does it drive? Pretty well, really. Again, I found TORCS performed in a similar manner to earlier Need for Speed games, that is the controls are fairly smooth and the car responds quickly. The car can also be a bit touchy at times and one soon learns not to brake while steering through a corner. So it is a racing game that provides good controls while also keeping the player on their toes. I like that, it keeps me focused. Another thing I soon learned to watch for are the varieties of racing surfaces. TORCS is not a one-size-fits-all simulator when it comes to race courses and the traction provided on these courses. Some tracks are smooth and have excellent grip, allowing for high speed turns. Others are rough and the player can quickly slide off the road if not careful. A rare few tracks feature both smooth and rough pavement which really made for some unpleasant surprises!

What surprised me about TORCS is that I found it had a very gentle learning curve and intuitive, smooth controls, but I still found the game highly challenging and interesting. The variety presented — the different tracks, roads and available cars — kept me coming back again and again, not only in an effort to win races, but in order to enjoy different challenges and new scenery. How does this car handle? What does this track look like? How can I better my time around this twisty bit? Those were the questions which kept me coming back again and again to test myself against TORCS. And I loved the experience! 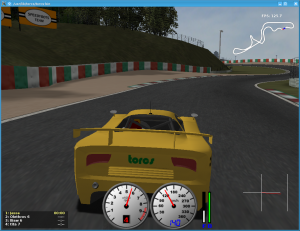 The game is a lot of fun, I’d easily give it a 7 or 8 out of 10 for quality and enjoyment. Still, there were a few problems which frustrated me repeatedly while playing TORCS and mostly of them involve the computer-controlled cars. The main complaint I had was AI cars would constantly drive into me. I ran approximately 200 races while (ahem) testing TORCS and, of those, I believe there were less than 10 races I was able to complete without getting smashed into by an AI-controlled car. Granted, some of these collisions I may have brought on myself from driving too close, but most of them appeared to be a result of the AI either not caring I was there or intentionally driving into me. At first I thought the AI might just be sticking to a predetermined racing line and I happened to be in the way, but on a few occasions the AI abruptly changed lanes on a straight piece of road to push me, which makes me suspect the AI is intentionally aggressive. Which brings me to a second frustration: the computer-controlled cars are more stable than the player’s car. Around half the time I bumped into an AI car (which, remember, happened in almost every race) I could recover from the collision. The other half, I went spinning off into the grass or guardrail. The AI car almost always continued on with hardly a wobble. I also found that the AI cars could get away with driving on grass or in sand traps without slowing down or losing control, something the player’s car cannot do. It can be frustrating to be driving right on the edge of a turn and seeing a car go by, driving smoothly across the grass. In short, my complaints boil down this thought: I spent about as much effort trying to avoid collisions with aggressive AI cars as I did on making my own car go fast because I knew such collisions would only benefit the AI.

Not everything about the AI players bothered me. I was happy to discover that TORCS does not appear to use “rubber banding”, that is the AI does not change its style or performance based on how well the human driver is doing. We can set the computer’s skill level in the game’s options, but during the course of a race the AI does not appear to speed up or slow down to match how well the player drives. I find this is a positive incentive to drive well. I also like that, while the AI usually drives proficiently, the computer-controlled cars do sometimes make mistakes. In a few rare cases I saw AI players slide off the track or spin on loose-surface roads and I feel this slight imperfection in the AI makes the game more interesting and makes the opponents feel more natural.

With a few concerns about AI aggression aside, TORCS is very well put together with many racing challenges varying from driving alone on a rocky, uneven mountain road to competitive races around an oval to fun dirt racing challenges. The game finds a nice balance between good graphics and low resource requirements, realism and ease of use. If you are into road driving simulations or auto racing at all, TORCS is a must play.