Ardentryst is a role playing game which features elements of platforming and side-scrolling action. The game attempts to balance a story with levels of action, not only giving us the means to kick ass, but the motivation to do so.

The game starts out as one might expect. The kingdom is in danger, these are dark times, etc. We are given the choice of playing through the game as either a fighter or as a mage and these two characters are quite distinct, both in their abilities and, in some cases, the levels they travel through. When we start the game we get to spend points to boost our character’s stats and select their primary weapon. The fighter gets all melee weapons (sword, axe, halberd) while the mage can choose between melee weapons and a cross-bow. Both characters either start with or acquire spells as we progress through the game though, for obvious reasons, the mage tends to get better spells and her combat focuses more on using her magic abilities. 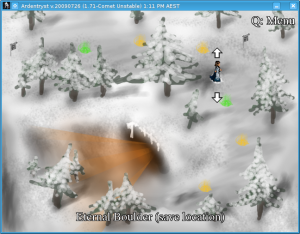 I played both characters, starting with the fighter and I’m glad I began with him. The fighter starts off with some pretty easy levels, some of which are basically just walking through and trying not to step on stationary enemies. The levels are simple, side-scrolling affairs, similar in style to Super Mario World or Donkey Kong Country. The graphics are fairly simple, yet pretty. The characters are well drawn and I found the controls to be smooth. At least I found the directional controls to be fluid. The combat controls took me a while to get used to. Moving about and jumping is done with the arrow keys while combat typically uses a combination of keys. For example, casting a spell involves pressing “D” and then another key. Combat is mostly mashing the “C” key, but sometimes we add another key for special attacks. I spent a lot of time smacking the “C” button and then running away from foes while trying to figure out which combination of “D” and something else I wanted for my spell,

I would like to point out here that the mage and fighter start off on completely separate maps, so we get a different set of challenges. The mage’s levels I found to be harder, even though I played as the mage second. There appear to be more enemies and more complex level design in the mage’s world. I also found I preferred playing as the mage most of the time as her character allows more a wider range of tactics. The fighter, as fighters do, typically just runs up to enemies and bashes on them until they die. The mage can use various targeting or area-attack spells which makes combat a little more thoughtful. The mage’s only apparent weakness seems to be aiming her cross-bow. The game automatically aims for us and this is convenient when there is one enemy on the screen. When the screen has multiple enemies, especially flying enemies, the targeting system loses its mind, aiming seemingly at random. 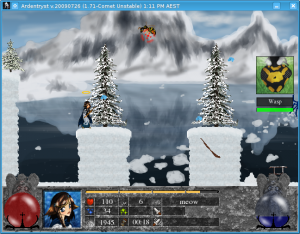 As the characters advance through the levels they pick up items which can be sold or used. Monster shells we gather from fallen enemies can be sold, potions we collect can be consumed for better stats and money we collect can be used to purchase better equipment in the game’s shops. I found the levels to generally be short, fun and easy to navigate. Combat, once I got used to the controls, was smooth. There are a few more cut-scenes than I would like which slow down the game a little, but otherwise I found Ardentryst to be a lot of fun.

Or at least I did until I hit the end of the second map. There is a boss fight at the end of the second map which completely kicked my ass every time I tried it. I upgraded my equipment, stocked up on health potions and still never got remotely close to defeating the level’s sole enemy. Now, it may be that I was missing something. There is a level early on where a fellow sends us on a quest to collect 10 shells and I never found all of the shells. It may be that if I had been willing to grind a bit more I would have collected enough shells and managed to trade them for a suitable weapon. Maybe, or maybe I’m just not good/persistent enough. At any rate, I didn’t make it past the second world, but I had a lot of fun getting to that point. I especially like the level of character customization I got to go through as it really made me feel more like an active character in the story rather than just a guy mashing the attack button.

For those of you who try and enjoy Ardentryst, as I did, the developer accepts donations.