The Ur-Quan Masters is not a new game, it was originally released as Star Control II back in the early 1990s. Many years after the release the developers were kind enough to hand over their source code and let the game be updated and ported to new platforms. The open source version of the game took on the name The Ur-Quan Masters to avoid legal disputes over the title. Since becoming open source, The Ur-Quan Masters (UQM) has been ported to run on Linux, OS X, FreeBSD, OpenBSD and Windows.

The game’s story begins with the idea that, in the future, the human race has spread out among the stars and found (mostly) friendly space-traveling races. These races came together to form an alliance and things are all happy and peaceful. That is until the powerful Ur-Quan show up with their massive fleets of battle thralls and begin to lay waste to the Alliance. You would think that is where UQM would begin, with you, the hero, positioned as the galaxy’s last hope. Not so fast. Our protagonist (the player) grew up on a far distant colony, away from the war between the Alliance of Free Stars and the Ur-Quan fleet. The game starts years after the Ur-Quan arrived and the player does not even know if the war is still on-going or, if not, who won. The player’s mission is to return to Earth and, if need be, help in whatever way possible. Upon arriving at Earth the player discovers a few things. One is that the Ur-Quan won the war, enslaving or destroying everyone who opposed them and, two, the Ur-Quan are still hanging around this region of the galaxy and so not many people want to stand up against the massive alien fleet. 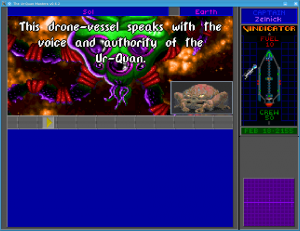 UQM is essentially a space exploration and combat game which renders space as a 2-D map. The player is tasked with traveling around the galaxy, finding resources, forging alliances, fighting Ur-Quan thralls and solving mysteries. The player typically moves into a region of space, discovers whether the locals are friendly or hostile, attempts to learn their secrets and make off with any resources which can be found on the alien worlds. This is the dry, technical version. What makes UQM come alive is a combination of humour, head-scratching puzzles, intense combat and a wide range of truly unique alien characters. Some aliens are friendly and are happy to join the cause, but most are either neutral or hostile. Each of them has their own sets of stories, unusual traits and (most of them) can be won over in one way or another. The game is easily one of the most interesting and entertaining experiences I have had, largely because of the funny quirks, misunderstandings and amazing dialogue present in the alien encounters. This is not a universe with simple groups of “good guys” and “bad guys”. There are back stories, rationalizations, tricks, misunderstandings and different points of view to be shared. The game shows that we can be on opposite ends of a conflict and both sides can have good reasons for doing what they do.

An aspect of the game I really enjoyed was that we can play with a few different styles. We can be the friendly, loveable hero; we can be a sort of neutral, tit-for-tat character; or we can be a ruthless and demanding tyrant. The game is certainly much easier if we play the nice-guy hero as more races support a player who is friendly toward them. However, there is something oddly appealing about building up a fleet of ships and forging a new empire, kicking butt and taking names.

Despite being over twenty years old, UQM holds up surprisingly well. Some of that strength is likely due to the hard work of the modern development team, but I think it is also because the game is so focused on story and having rich characters. The graphics may have been upgraded a little, but the key elements of what make this a fun game are in the stories and the sense of exploring a vast galaxy. There are still forums dedicated to people discussing the many alien races and their various quirks, hashing and rehashing points of view. I think that gives testament to just how diverse and interesting these characters are. 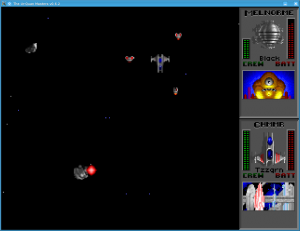 Apart from the main game, the campaign mode, there is a separate feature of UQM called Super Melee. The Super Melee is essentially an arena where two players can face off against each other, engaging in one-on-one space combat. This is fun in itself as the player can fight another person (locally or over the net) or fight against the computer for practise. I like having this option. On days when I’m looking to dive into a game for an hour, I can play the UQM campaign story, but if I just want to zone out for ten minutes I can play a round of Super Melee against the computer, experimenting with various ship combinations to see which vessels fight best against others. There are over twenty ships to choose from and I found there is a certain rock-paper-scissors quality to the game. Ship A may beat Ship B, but it will almost always lose to Ship C. This keeps combat interesting and prevents any one alien race from holding dominance over all the others.

I have a weak spot in my soul for space exploration games and UQM is probably one of the best space exploration/trading/combat games I have played. It holds up beautifully despite its age and has a great mix of combat, humour and serious drama. I highly recommend it to everyone — you, your partner, your cat, even your cat’s partner.