The Battle For Wesnoth is a turn-based strategy game which takes place in a fantasy setting. The game features two or more players on a large map divided into hexagons. Each player attempts to capture objectives, control villages and, of course, survive. Capturing villages gives the player a higher income of gold which allows for the creation of more military units. Most scenarios play out like a game of capture-the-flag or require the player to take over the map, defeating all other players.

From this simple-sounding description comes one of the most fun and entertaining turned-based strategies I’ve played. And apparently the same holds true for other gamers too. One reason I decided to give Battle For Wesnoth a try is every review I’ve seen of the game gives it five stars out of five, an impressive feat.

Firing up the game gives us a menu letting us start a new game, change settings (such as graphics, audio and information shown on the map), load a previous game or run through the tutorial. The tutorial puts us through a couple of maps, slowly introducing new concepts and explaining aspects of the game, how to use villages to support the army, how to create new military units, how to complete objectives and, of course, how combat works. The tutorial is really well done and makes learning the basics of the game fun. Then we’re encouraged to try a couple of the different entry-level scenarios. 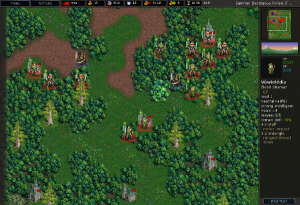 Typically each scenario begins with the player at their base with a few units and a small amount of resources. As the game progresses the player must create new units, spread out and find villages to occupy (to provide more resources) and complete against the AI which is trying to do the same things. Usually the scenario will have an objective such as “default the AI leader” or “get your hero from point A to point B”, or both. All of this probably sounds like standard turned-based strategy material, however there are aspects of the game which make it stand out.

First of all, some of the characters have dialog. Not all of them, but key members of the player’s team and the AI leaders will usually chat at the beginning of the scenario and at important moments during the conflict. Campaigns have running story lines and characters with distinct personalities and I found it made me more interested in both the objectives and keeping my side alive. The game also features two important characteristics: terrain and diverse units. Each map has features such as mountains, rivers, forests and open roads. Walking a unit down an open road is a fast way to travel, but leaves them open to attack. Running through trees is slow, but provides defensive cover against archers. Crossing rivers is slow and leaves units open to attack. Often times there are multiple paths one can take to reach an objective and the player must balance speed against cover. The military units themselves are distinct and each mission in a campaign usually introduces a new type of fighter. Some are good at ranged combat, others are better at melee and others aren’t fighters so much as healers or clerics to turn away undead enemies. For the most part I found the units to be well balanced and each comes with a strength and weakness, making for varied game play.

The graphic quality in Battle For Wesnoth is good, or as good as it should be. In a top-down turn-based base we don’t need much detail. All we really need is to be able to tell what kind of terrain we’re fighting on and what our units are. The game goes a little further, playing little animations so that archers pluck bow strings, fighters swing swords, shamans waves their staffs. The style is clean and well executed and will run on low-level video cards. Audio is likewise good. Though I usually leave sound off when playing such games due to their repetitive nature, the sound effects and music are well done.

So far Battle For Wesnoth is looking really good, it has interesting stories, lots of balanced fighters, good graphics, tons of missions, diverse terrain… It does have a few faults though, which will only show up after playing a couple of campaigns most of the way through. The first is a pet peeve of mine, which might not bother some gamers: time limits. Each scenario has a time limit. Now, generally a player will probably make it through their mission without worrying too much about the limit, the designers were kind enough to not make every mission a race. However the time limit is there and bad luck or a misstep can put you over. There are fewer things that get under my skin more than wiping out an entire map of enemies on my way to an objective only to be told “you’ve been defeated” two steps from the end. Which brings me to my second complaint and that is the combination of units with a lot of hit points, on maps with a lot of defensive terrain, where the enemies can regenerate health. There are a few maps where the action pretty much comes to a stand still for several rounds as the players take turns swinging and missing, swinging and missing, swinging, hitting and regenerating over and over because all the numbers stack up in the defence column. A situation which wouldn’t be so bad except the clock is still ticking and the fight is going to drag on for some time.

Still, those bottlenecks are rare and, for the most part, the game is well paced. The scenarios usually allow for a few different approaches and, again, the story line gives the game an extra touch of flavour. I had a good deal of fun playing Battle For Wesnoth this week and I have only just scratched the surface given the number of available missions. It’s a really good game, it’s free and it runs on virtually every major platform out there. Well worth a try, especially if you’re into games like Civilization or Risk.